Is the importance of female role models in science overstated? 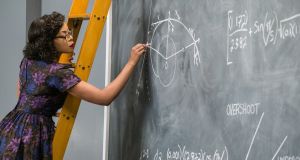 Taraji P Henson as Katherine Johnson in the film Hidden Figures, who was pivotal in sending US astronaut John Glenn to space

I recently watched the movie Hidden Figures and was incredibly moved by the true story of Katherine Johnson, Dorothy Vaughan and Mary Jackson, who worked at Nasa during the space race of the 1960s. These women, originally employed as human computers in the coloured section at Nasa, became trail-blazers in their fields of mathematics, physics, engineering and computer science, breaking not only gender but also racial stereotypes of the time.

Watching the story, I began to wonder how important role models are for young people. These three successful women did not have any role models to emulate, but persevered to pursue their subject because they enjoyed the challenge and reward – how important are role models in the sciences.

One study, based on data from the OECD Programme for International Student Assessment (Pisa), found that having same-sex role models in these subjects may not actually make a substantive difference to the number of young women choosing to work in these fields.

Based on data from more than 700,000 15-year-olds across 68 countries, researchers concluded that the concept of role models in the sciences is far more complex than we might think. On the one hand, broadening the representation of women in fields such as engineering and computer science has been found to have a positive effect on the numbers of women pursuing those subjects.

This is due, in part, to increasing their sense of belonging and interest in the field. On the other hand, a study from the University of Michigan found that this positive impact may be counteracted by the image of these ostensibly successful individuals, who make science seem even more unattainable to those who do not identify themselves as being good in the subject.

The Pisa study found that sociocultural values probably play a far more important role than role models in positively influencing young people’s perceptions of the sciences. Messages from parents are particularly important, especially so for young women who, in the majority, are less encouraged to pursue maths and maths-based subjects than their male counterparts.

This can be difficult when it’s not obvious that studying a degree, such as theoretical physics or computer science, is a direct route into gainful employment. It is important that, as a society we communicate the message that skills in mathematical modelling, data analysis, and programming are becoming more and more essential in the world and that there is already a deficit of graduates to fill vacancies in these areas.

For students who are interested in these subjects, we should be working to credibly and comprehensively inform them of the very many options which could be opened to them. We need more role models (of any and all genders) in science, mathematics, computer science and engineering to make themselves and their work known in a broader and more public context.

In Ireland, we have begun to celebrate our own, as yet, hidden figures in the sciences. The recent Women on Walls initiative with the Royal Irish Academy and Accenture has explicitly highlighted female scientists who have excelled in their fields. From molecular evolution to renewable energy, these researchers are celebrated for their work which is contributing important knowledge of how the world around us works.

We are also beginning to celebrate our historical figures and can take note of women such as Matilda Coneys, who was the first woman to undertake a course in pure mathematics at the Royal College of Science for Ireland in 1867 and, to the surprise of all of her classmates, came first in her exams.

The gender of a role model is not as important as we might think. In general, young women are more inspired by female than male role models, but overall those who serve as an example have a positive effect on young people’s ideas and aspirations, no matter who they are.

In my own youth, reading Stephen Hawking and Isaac Asimov was enough to make me want to learn physics. I was, however, always disappointed that my Lego men did all of the interesting work of engineering and construction, while the women simply wore ponytails and lipstick. It’s good to know that Katherine Johnson has been celebrated in a new batch of these figurines, communicating even more important messages: Looking like a scientist, mathematician, engineer or computer scientist does not confine itself to any one gender, race or colour.