Our diets may be bad for our health, but a vegetarian world would create new problems 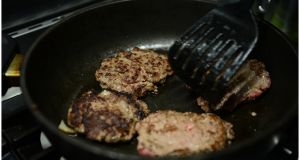 We are fortunate to be meat-eaters because meat drove the evolution of our large brains and complex bodies. Photograph: Bryan O’Brien/The Irish Times

The Lancet medical journal published a comprehensive report last month on human diet and global food systems. Our food production systems are causing “catastrophic” damage to the environment, including significant contributions to greenhouse gas emissions, and our diets are causing much human ill-health, it concludes.

The report recommends a dramatic reduction in meat and dairy consumption (inferred 90 per cent reduction in red and processed meat consumption in Ireland) to be compensated for by a dramatic increase in consumption of plant foods (fruits, non-starchy vegetables, wholegrains, legumes, nuts and vegetable oils), supplemented with low/moderate amounts of seafood and poultry.

I will comment on two aspects of this report. Firstly, notwithstanding the health and environmental implications of our current levels of meat consumption, we are fortunate to be meat-eaters because meat drove the evolution of our large brains and complex bodies. And secondly, a recent study by Robin White and Mary Hall in the Proceedings of National Academy of Sciences (November 13th, 2017) calculates that if everybody in America suddenly went vegetarian, the net result would be a nutritionally inadequate national diet, while total US greenhouse gas emissions would reduce very little.

There is much evidence that eating red and processed meat at current levels exacts a significant toll on our health. According to my UCC colleague Prof Jim Heffron, who teaches and researches on biochemical toxicology, the World Health Organisation (WHO) in its 2015 report classified processed meat (this includes hotdogs, ham, bacon and sausage) as a Group 1 or definite human carcinogen, ie there is sufficient evidence from human studies that it causes cancer. WHO has also classified red meat (beef, lamb, pork, goat) as a Group 2A or probable human carcinogen, ie limited evidence that it causes cancer.

If everyone in the US went vegetarian, greenhouse gas emissions from all sources would only drop by 2.6 per cent

I am surprised that human health is so labile in the face of eating meat because, as I explained in my last column, hunting animals for their meat guided human evolution – physical, physiological and cognitive – over the past two to three million years. Hunting animals drove the evolution of human bodies that thrive on aerobic exercise and the co-operative social behaviour needed to capture large animals and share the kill equitably. Eating plants exclusively does not drive evolution in these directions. And eating the nutrient/calorie-rich meat fuelled the development of our extraordinarily large brains. The encephalisation coefficient (EQ) measures a species’ brain size compared to the brains of other similar-sized species. Human EQ is 7.5, dolphin 4.6, chimpanzee 2.3, dog 1.2, cat 1.0, mouse 0.5.

The authors propose several reasons why a universal switch to a plant-only diet would have such a modest effect. Livestock currently eat much human-inedible agricultural waste, such as corn stalks. In the absence of livestock, this waste must be burned, releasing carbon dioxide. Also, land previously devoted to livestock would be switched to crops, increasing demand for fertilisers whose manufacture would also release carbon dioxide.

The authors also calculate that a plant-only diet would fail to meet the population’s nutritional requirements for calcium, vitamins A and B12 and several key fatty acids. While an individual vegetarian diet can be balanced to meet these nutritional requirements, this is not possible if the entire population goes vegetarian because the food types necessary for balance are currently not produced in sufficient quantities.

We also have a naturally evolved need for aerobic exercise that, on average, we sadly fail to meet

I accept that human health and the natural environment would benefit if we reduced our meat-eating, despite some uncertainty as to the scale of the benefit. But I fear that trying to implement drastic reductions right now would meet such resistance that the whole idea of reducing meat consumption might be rejected. Better to establish a significant reduction first and see where we go from there.