Fionn Ferreira from Ballydehob earns €45,000 bursary at event in California 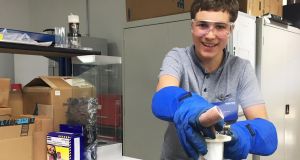 An Irish student has won a global science award for his project which aims to remove microplastics from the world’s oceans.

Fionn Ferreira (18) from Ballydehob in west Cork, was named the overall winner of the 2019 Google Science Fair, an annual science competition open to students all around the world between the ages of 13 and 18.

One of 24 global finalists, chosen from a shortlist of 100 entries, he was awarded a $50,000 (€45,000) bursary, at an awards ceremony at the Google international headquarters in Mountain View, California on Monday.

Mr Ferreira’s project put forward an innovative idea of using magnets to filter microplastics from bodies of water. The young scientist used a magnetic liquid called ferrofluid, which sticks to plastic, and which is then attracted to the magnets and removed from the water.

Following thousands of tests, he believes his project could remove at least 87 per cent of microplastics from water samples.

“I look forward to applying my findings and contributing towards a solution in tackling microplastics in our oceans worldwide,” he said.

Mr Ferreira sat his Leaving Cert in Schull Community College last month and is due to attend university in the Netherlands. The 18-year-old also works as a curator at the Schull Planetarium and speaks three languages fluently.

A regular entrant in the BT Young Scientist Awards, Mr Ferreira has won 12 science awards and has a minor planet named after him by the MIT Lincoln Laboratory in recognition of his achievement at the 2018 Intel International Science and Engineering Fair.

Vint Cerf, vice-president at Google, said each entry “was an impressive, original contribution that has real-world implications for some of the world’s toughest problems”.

“Behind every ambitious student are parents and teachers who cheer them on, and push them to keep learning. And to the students, you rock. We can’t wait to see what you do next,” Mr Cerf said.