Infomar project, to be completed by 2026, will help predict impact of storms and floods 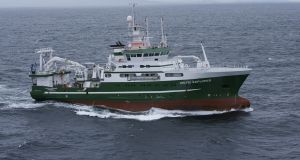 “If we don’t have the data, we can’t make sustainable management decisions,” says Thomas Fury from the Marine Institute. This is possibly the simplest explanation anyone can offer to justify the 20-year-long project to map the seabed surrounding Ireland.

Fury is the joint manager – with Sean Cullen from the Geological Survey Ireland (GSI) – of the integrated mapping for the sustainable development of Ireland’s marine resources (Infomar), a project funded by the Department of Environment, Climate and Communications.

Its aim is to map Ireland’s entire seabed by 2026, becoming the first country in the world to have systematically mapped its marine territory. Ireland’s ocean territory area – at 880,000sq km – is about 10 times the land mass of the country.

Ireland’s continental shelf includes the land which extends under the sea to 200 nautical miles from the coastline, giving Ireland one of the largest seabed territories in Europe as shown on the so-called Real Map of Ireland.

The drive to have more data to better inform licensing decisions and promote sustainable development across shipping, port development, inshore fisheries, aquaculture, energy and tourism led to the continuation of this mapping exercise. Infomar’s first phase (2006-2016) resulted in surveying 26 priority bays around Ireland, three strips of coastline in the southwest, south and east, and the fisheries biologically sensitive area.

Phase two, which will continue until 2026, aims to finish off the mapping of Ireland’s exclusive economic zone designated by the 1982 United Nations Convention on the Law of the Sea.

The Marine Institute co-ordinates the work of two large surveying vessels, including the Celtic Explorer, which bring three scientists out to survey waters beyond 30 nautical miles off the Irish coastline. Five smaller research vessels managed by the GSI survey inshore waters.

Understanding the topography (the surface structure and shape) and geology (the rock structure) of the seabed in Irish waters is crucial for any large offshore infrastructural projects, from wind farms to telecommunication cables and power cables.

“For example, we have discovered sand waves, which are mega dunes in the Irish Sea, which extend from the north to the south coast. Some of these sand waves are more mobile than others. It depends on their depth and the type of sand. All of this information is important in deciding where to put floating or fixed wind farms at sea,” Fury says.

All of the Infomar findings are open-source data, available on global and European ocean datasets and portals to academic researchers and environmental consultants studying the viability of wave, wind and tide energy generation and oil and gas exploration and production. Data from Infomar directly feeds into the marine and ocean energy testing site in Galway Bay (smartbay.ie) and the Sustainable Energy Authority of Ireland’s Atlantic marine energy test site in Belmullet, Co Mayo (oceanenergyireland.ie).

Seabed mapping also provides key information about habitats that need to be protected and the conditions in which aquaculture projects will thrive or fail. The discovery in 2018 of a rare shark nursery in a deep-water coral reef system 200 miles west of Ireland was an exciting one.

David O’Sullivan, chief scientist on the SeaRover (Sensitive Ecosystem Analysis and ROV Exploration of Reef Habitat) survey, says at the time the discovery – in an offshore special area of conservation in Irish waters – showed the significance of documenting sensitive marine habitats. “It will give us a better understanding of the biology of these beautiful animals and their ecosystem in Ireland’s biological sensitive area,” he says.

Data from Infomar is also important for coastal protection and predicting the impacts of storm surges, floods and possible siltation, as well as protecting habitats from pollution. Fury gives an example of the latter: “We discovered a spawning ground for herring off the southeast coast in an area proposed as a dumping ground for dredge spoil from Waterford, so we were able to inform them that they needed to change their dumping site.”

Infomar scientists are also asked to provide detailed maps for specific aquaculture projects. For example, as part of the Horizon 2020 project, Tools for Assessment and Planning of Aquaculture Sustainability, detailed seabed maps of the Kenmare river helped assess the limits to fish farming in a semi-enclosed bay.

“The oceanographic scientists were able to model the water flow, currents and nutrients in the semi-enclosed bay to assess the ecosystem tipping point from the commercial harvesting of shellfish,” Fury adds.

The maps and models provided “the catchment carrying capacity” based on the scientific knowledge and understanding of how much shellfish can be put in an enclosed area before it pollutes the water and reduces the growth rate of the shellfish. Seabed mapping technology can also be used to map intertidal seaweed resources. “If you know what’s there, you can know what you can sustainably take away,” he says.

Scientists at the Marine Institute collaborate with their counterparts around the world to advance understanding of the ecosystems in the ocean and how they will be impacted by climate change. “Less than 20 per cent of the world’s seabed has been mapped so we work with scientists from Canada, the United States, South America and South Africa in the Atlantic Ocean Research Alliance to try to understand the Atlantic on a full basic scale,” Fury says.

He sees huge potential for Ireland to use the seabed imaging to develop angling and diving tourism: “Ireland can show off its underwater like no other country can and once the imagery is linked to biology and topography, it’s a great resource.” He says the public, for example, has a particular fascination with ship wrecks which have been mapped as part of the Infomar programme.

“Ireland’s offshore waters are steeped in maritime heritage and there are wrecks from historical European and transatlantic trading routes as well as Spanish Armada vessels from 1588 and modern-day fishing vessels which have sunk.” Information sheets on shipwrecks are readily available, as is a Dive app highlighting Irish dive sites.

A conference will be held on December 3rd and 4th to celebrate 21 years of mapping Ireland’s seabed – see infomar.ie

The Infomar programme became part of the Junior Certificate geography syllabus in 2018 (scoilnet.ie). Seabed mapping involves many aspects of science from geology to physics to biology.

The mapping itself relies on multibeam echo sounder which spreads out like a fan on the seabed. Scientists calculate the depth of the ocean by measuring the time it takes for the sound beam to come back to the surface.

So-called sound velocity profilers measure the temperature, salinity and changes in the density of the water. Sub-bottom profilers take photographs of what lies underneath the seabed.

Remotely-operated high-definition cameras with robotic arms sit on the seabed gathering imagery which is combined with images from drones on the surface to accurately map habitats in specific areas.