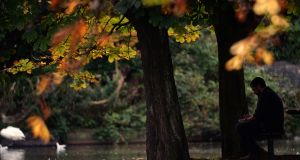 Next time you’re out in the woods admire the complex chemistry that trees employ to maintain themselves over decades of stress and attack. Photograph: Eric Luke

This year more than ever there is a sense that we are facing into a long and bleak winter. Before we get there though nature has a treat in store – the annual show of autumn colours. The leaves on about 20 per cent of European deciduous tree species turn red, 27 per cent turn yellow and the rest remain green before their leaves are lost.

While we bundle up in hats and scarves and enjoy crisp, breath fogging walks in the woods to enjoy the show, insects like aphids are checking out potential maternity wards. After a busy summer sucking the life out of garden plants and popping out already pregnant baby aphids, nested within them like Russian dolls, the aphids get down to the serious business of ensuring next year’s generation by laying eggs.

Aphid mothers like to migrate to trees in the autumn to lay their eggs so that the babies that emerge in spring have a ready source of food in the bursting spring buds. They face a conundrum though, trees are not unwitting hosts. Some trees are better defended against the aphid hordes and produce chemical defences that can ruin a sap sucker’s appetite or even poison them.

Other trees have such low concentrations of nitrogen in their leaves that an aphid would have to suck an inordinate amount of sap to get enough to make the proteins it needs; a bit like having your steak dinner minced up and thrown into an Olympic sized swimming pool.

For starters, aphids lack the ability to see the colour red, they do not have the red colour photoreceptor in their eyes. What looks like a riot of colour to most of us, an aphid experiences a bit like a red-green colourblind human with only colour intensity differences between red and green leaves. Experiments have shown however that this colour intensity difference is enough for the aphids and what we see as red leaves are 70 per cent less attractive to them.

The evidence has mounted up that red leaves indicate higher concentration of defensive compounds and aphids that hatch out in spring on trees that had green leaves in autumn do better than those aphids which emerge on red leaved trees. Coevolution with insect herbivores is quite likely to explain some of the Autumn colours.

An alternative explanation for autumn colours is that they result simply from the unmasking of coloured pigments in the leaves as chlorophyll is degraded. Chlorophyll gives leaves their green colouration and is broken down to colourless compounds before the leaves die and fall.

Trees are great recyclers and do their best to reabsorb all the useful nutrients in their leaves before they drop. This explains the yellow leaf colours which are made by carotenoid pigments which are present in the leaves year round but are masked by chlorophyll. Unmasking does not explain the red colours though, as the red-purple spectrum of autumn colours is caused by anthocyanins which are produced by the tree newly in autumn and are not present at other times. Brown colour is a result of simple cell death.

Trees may also use the red pigments in autumn to protect their leaves from light damage. Too much light can slow down photosynthesis and damage leaves, particularly in the cool, bright days of early to mid autumn.

The red-purple pigments come from anthocyanins which may act as a direct sunscreen and also as antioxidants which repair oxidative damage to leaves. The protection against light damage may enable leaves to maintain their function into the cooler temperatures of autumn so that nutrients can be effectively resorbed.

Trees have a delicate balance to strike between the competing demands of maintaining photosynthesis as late as possible, protecting themselves against light damage and defending themselves against next year’s herbivore generation. Next time you’re out in the woods admire the complex chemistry that trees employ to maintain themselves over decades of stress and attack.