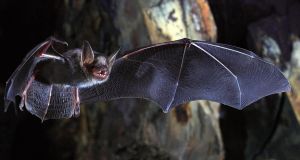 Scientists still debate over why bats seem to harbour so many viruses. Photograph: Olivier Farcy

The 2011 film Contagion seems strangely prescient when viewed in light of Covid-19. The disturbing movie features quarantines, face masks, Gwyneth Paltrow, conspiracy theories, R numbers and a race to develop a vaccine against a deadly virus from Asia.

A flashback shows Contagion’s pandemic began after a bat flew to a pig farm and dropped an infected piece of fruit, eaten by a pig. The infected pig is slaughtered and prepared by a chef, who passes the bat virus via a handshake to Paltrow (as Beth) – patient zero.

That scenario did not so much come from the 2003 SARS outbreak, but from another germ, the Nipah virus. This kills between 40 and 100 per cent of people it infects, which is why virologists worry about it and why it is listed as a priority disease by the World Health Organisation.

“It can potentially go from bats to an intermediate host like pigs and into humans,” says Prof Emma Teeling, bat scientist at UCD.

Named for the village Sungai Nipah in Malaysia, Nipah virus was first identified in 1999 after an outbreak in pigs that went on to infect nearly 300 people in contact with the pigs. The outbreak ended when over a million pigs were culled, but not before 109 fatalities. At the time, it seemed that the virus did not transmit from one person to another.

It was assumed the pigs contracted the virus by eating fruit contaminated by flying fox fruit bats. Malaysia banned fruit trees around pig enclosures. Since then, there have been no cases there. Scientists later discovered small outbreaks of the virus in Bangladesh and India, with fruit contaminated with bat saliva or urine the most likely culprit.

“We suspect that Nipah virus has been spilling over to people for decades in Bangladesh,” says Dr Raina Plowright at Montana State University, who specialises in disease spill-overs that originate in bats, including Nipah virus. This happens when people drink date sap contaminated by the bats. Bangladeshis are now discouraged from consuming raw date palm or to buy only from sellers with barriers to stop bats from accessing tree sap.

Nipah virus belongs to a family (paramyxoviruses) that includes measles and mumps, both of which spread really well

In 2018, an outbreak in southern India set off alarm bells. A villager turned up at a hospital sick. He was infected with Nipah virus and went on to infect 18 other people at two hospitals. All told, 21 out of 23 people who became infected died. “We don’t know where it came from. There is neither pig rearing nor the same sap collection practices we see in Bangladesh,” says Prof Steve Luby, an epidemiologist at Stanford University.

The virus infects a variety of cells, including those that line human blood vessels. Some people develop a respiratory illness when infected, but the main symptoms are fever, headache and mental confusion, often followed by lethal brain inflammation.

The fear now is the virus could become more transmissible. “It has never taken off and spread. There’s always been a short chain of human transmissions,” says Plowright. One reason is that people get severely ill so rapidly that they are quickly isolated, especially in Bangladesh and India, where medics are now more aware of the disease.

Nipah virus belongs to a family (paramyxoviruses) that includes measles and mumps, both of which spread really well, notes Dr Rebecca Dutch, virologist at the University of Kentucky. “If there were small changes in Nipah virus that enhanced its ability to spread from human to human, then we would be looking at a pandemic virus with a really high mortality rate.”

The virus has a respiratory component, so it could potentially be spread by coughing. “The best theory would be that those viruses right now don’t generate a lot of infectious particles that are airborne or coming out of infected people as they breathe out,” Dutch adds – perhaps because they don’t get into the airway until late in the infection.

Scientists still debate over why bats seem to harbour so many viruses. Bats have their anti-viral defences permanently switched on, Teeling explains, and this may force viruses to evolve constantly, generating a steady stream of new variants. Bats also roost in large colonies, making it easy for viruses to hop quickly between bats, and infected bats can fly from one colony to another.

If there are more spill-over events from bats to people, this offers opportunities for Nipah virus to mutate in ways that allow it to one day hop more efficiently from person to person. It might select traits that would make this more likely, warns Luby, who doesn’t hold back in describing the devastation this could inflict.

A year ago, Luby would have predicted the influenza virus would cause the next pandemic. “Even if it had a 2 per cent case fatality rate and ran across the world, that would be terrible, but it wouldn’t be the collapse of civilisation,” he says. “On the other hand, a disease with 75 per cent case fatality [Nipah] that is equally transmissible is an existential threat to human civilisation.”

This may sound alarmist. Covid-19 does not make a Nipah virus outbreak more or less likely, but it does put us on notice that we need to be better prepared for what is out there, he believes. It is not impossible for a virus to be both highly contagious and deadly. Smallpox was extremely contagious and killed about 30 per cent of those infected.

Nipah outbreaks have been spotted and halted where just one or a few people were infected. If there was a mutation that made it less obvious during early infection or more transmissible before a person fell ill, the number of infected people could be much higher before scientists cottoned on to an outbreak. More infected patients would make it harder to contain the virus.

Better surveillance systems in Southeast Asia seems a sensible precaution, where hospitals should be equipped to test for the virus. It seems advisable also for virologists to be sampling local bats too.

Right now, there is no vaccine or specific treatment for Nipah. “We need increased resources to build the scientific foundations for new anti-virals,” says Dutch. “Hopefully the Covid-19 pandemic will make people more aware and we don’t have to wait until the next one starts.” Teeling in UCD says her studies of bat immune systems could one day point the way towards new anti-viral medicines. This is something we need.

Dutch rejects the idea of the Covid-19 pandemic is a once in a century event, noting we have just finished the worst Ebola outbreak in Africa, we had Zika virus emerge, we had the 2009 flu pandemic and now we have Covid-19. “Most virologists feel that we are going to keep getting these. We need to be better prepared.”

There are positive developments. In March, the Coalition for Epidemic Preparedness (CEPI) announced $25 million (€21.1 million) funding for an early safety trial of a vaccine to prevent Nipah infection in humans. CEPI was set up in 2017 to speed up vaccine development for new diseases, and is now supporting a number of vaccine candidates for Covid-19.

The Nipah virus candidate contains part of the surface protein of Hendra virus, a closely related virus from fruit bats that sporadically infects and kills horses and people in Australia. This was first discovered in 1994. Vaccines for emerging infectious disease such as Nipah will likely get a funding boost in the aftermath of SARS-CoV-2; a rare silver lining to the pandemic.

Also under a potential threat from the pandemic virus are several critically endangered primate species, such as the Western lowland gorilla and orangutan.

The scientists investigated how similar the docking protein (ACE2) that the virus uses to latch onto cells is between humans and 410 animal species. In particular, they zoned in on 25 amino acids of the ACE2 protein that are especially important for the virus to bind and gain entry into cells.

Those with an exact match included, unsurprisingly, our nearest ape relatives such as gorillas, gibbons, bonobos and chimps. They were classified as being at the highest risk for contracting SARS-CoV-2.

More unexpected was that whales and dolphins (cetaceans) scored as at high risk due to the similarity of their ACE2 receptor, which suggests that the virus may be able to infect their cells. This includes the harbour porpoise, gray whale, minke whale, killer whale, common bottlenose dolphin and beluga whale.

“No one would think that cetaceans might be infected, but they could. That scares the living daylights out of me,” says zoologist and bat scientist Prof Emma Teeling of UCD, who helped lead the study, published in the Proceedings of the National Academy of Sciences.

Marine mammals are long-lived and social animals and many are of conservation concern. Some scientists have suggested that the coronavirus could get into coastal waters through discharges from sewage plants.

Animals at low risk from the virus include horse, dog, rhinos and bears, at least according to their ACE2 receptor. The medium risk category included cattle, goat, cat species, rabbit and howler and spider monkeys. This sort of information could be useful for zoos, but comes with a warning. Additional experiments are needed.

“There are limitations to looking just at the ACE2 receptor,” says Teeling. Which cells and tissues have the receptor will differ between species, and there are many factors which decide susceptibility to Covid-19, including immune responses. Also, in cases where SARS-CoV-2 has infected mink, cats, dogs and hamsters, the virus may have entered using the ACE2 receptor, or it may have entered their cells another way.