Trump proves bluster is no defence against reality of coronavirus infection 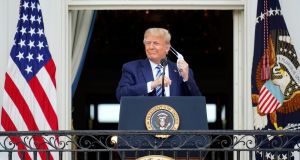 President Donald Trump takes off his face mask as he appears on the balcony during a rally at the White House in Washington in his first public event after he was hospitalised for Covid-19. Photograph: Doug Mills/New York Times

It’s hard to believe that it’s only seven months since the novel coronavirus which causes Covid-19 first emerged. Quite apart from the tragic statistic of more than a million deaths worldwide, and the many people whose health has been seriously damaged, the virus has had a devastating impact on national economies and on employment.

Early hopes that the virus would be quickly eliminated by lockdown proved optimistic. While such measures certainly slowed the infection rate, the gradual reopening of society soon caused infection rates to rise again in most countries. Since then, each country has been faced with difficult choices, from the reopening of schools and restaurants to the partial reopening of colleges and businesses.

In addition, a significant fracture has appeared in the reaction of citizens to the advice of health experts. While some argue for a “live with the virus” approach, others readily accept limitations on movement until a vaccine becomes available. It is interesting that almost all the scientists I know lie in the second group, perhaps because of our belief in the methods of science, especially in the context of unprecedented international efforts towards a common goal.

In Ireland, most citizens seem happy to follow governmental guidelines on social distancing and mask wearing. However, this is not the case in all countries. In the most glaring example, there has been a persistent reluctance in the United States on the part of both leaders and voters of a Republican hue to take basic precautions against the virus.

Thus, the news in early October that US president Donald Trump, the first lady and many of their inner circle had tested positive for the virus was not altogether surprising. After all, Trump’s disdain for social distancing and mask wearing is well known, from his insistence on reopening states with high infection rates to his hectoring of reporters wearing masks. Indeed, media coverage of a White House garden party, hosted to celebrate the nomination of a new supreme court judge, removed any doubt that the president and his staff had any regard for virus protocols. Ironically, it is now thought that this particular event may have functioned as a superspreader event.

At the time of writing, it appears the president is enjoying a full recovery. However, it is likely that the incident did some damage to his re-election prospects. In the first instance, the incident ensures that the virus remains a central theme of the election, reminding citizens of his administration’s disastrous performance in protecting Americans from the disease. Second, Trump’s succumbing to the virus serves as a reminder that rhetoric is one thing and facts are another. It turns out that bluster was no defence against the reality of Covid-19.

This, perhaps, is the real lesson to be learned from recent events. Not long after Trump’s election, Kellyanne Conway, in her role as counsellor to the president, shocked many Americans when she spoke of “alternative facts”. It soon transpired that this relativism was to be the hallmark of this administration. The concerns of climate scientists were simply dismissed out of hand in favour of the vested interests of the fossil-fuel industry. More generally, Trump set about appointing lobbyists from the world of commerce to key positions in government agencies tasked with the protection of the environment, a strategy which has resulted in the rollback of countless regulations put in place over the years to protect the environment from the worst ravages of industry.

But facts are facts. It turns out that greenhouse gases from industry are indeed warming the planet. Whether one choose to believe this has no impact on the phenomenon itself; it is not a matter of opinion or of politics. Similarly, the Covid-19 virus can spread very effectively from person to person if we do not take basic precautions. Whether one accepts or denies this well-established fact does not have any effect on the infection process itself.

Thus, the contraction of Covid-19 by Trump and many of his entourage may be a blow in an election campaign that was already in trouble. After all, it’s hard to imagine a more concrete example of the failure of hubris when confronted with immutable facts. Indeed, the president may even get a taste of the full impact of the virus, as experienced by many ordinary citizens, if he loses his job and his current residence in consequence.

Dr Cormac O’Raifeartaigh lectures in physics at Waterford Institute of Technology and blogs at www.antimatter.ie