Saturn moon could be able to support life, study suggests 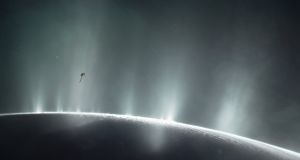 Nasa’s ‘Cassini’ spacecraft is shown diving through the plume of Saturn’s moon Enceladus, in 2015. Photograph: Nasa/JPL-Caltech/Reuters

Ice plumes shooting into space from Saturn’s ocean-bearing moon Enceladus contain hydrogen from hydrothermal vents, an environment that some scientists believe led to the rise of life on Earth, research published on Thursday showed.

The discovery makes Enceladus the only place beyond Earth where scientists have found direct evidence of a possible energy source for life, according to the findings in the journal Science.

Similar conditions, in which hot rocks meet ocean water, may have been the cradle for the appearance of microbial life on Earth more than 4 billion years ago.

“If correct, this observation has fundamental implications for the possibility of life on Enceladus,” geochemist Jeffrey Seewald, of the Woods Hole Oceanographic Institution in Massachusetts, wrote in a related commentary in Science.

The discovery was made using Nasa’s Cassini spacecraft, which in September will end a 13-year mission exploring Saturn and its 62 known moons.

The detection of molecular hydrogen occurred in October 2015 during Cassini’s last pass through Enceladus’s plumes, when it skimmed 49km (30 miles) above the moon’s southern pole taking samples.

In 2005, Cassini discovered Enceladus’s geysers, which shoot hundreds of miles into space. Some of the material falls back on to the surface as a fresh coat of ice, while much of the rest gathers into a halo of ice dust that feeds one of Saturn’s rings.

A decade later, scientists measuring the moon’s slightly wobbly orbit around Saturn determined it holds a vast ocean buried 30km-40km (19-25 miles) beneath its icy shell. The ocean is believed to be the geysers’ source.

Several moons orbiting Jupiter and Saturn are known to contain underground oceans, but Enceladus is the only one where scientists have found proof of an energy source for life.

“We’re moving towards Enceladus’s ocean being habitable, but we’re not making any claims at this point about it being inhabited,” lead author Hunter Waite, with the Southwest Research Institute in San Antonio, Texas, said in an interview.

“The next time we go back . . . you’re going to take something that not only picks up on the habitability story, but it starts looking for evidence for life.”

Enceladus has a diameter of 500km (310 miles) and is one of Saturn’s innermost moons. The heat needed to keep its ocean from freezing is thought to come from tidal forces exerted by Saturn and a neighbouring larger moon, Dione.