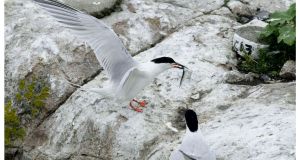 Over the next few weeks a conservation success story will touch down in Ireland: roseate terns will fly in from West Africa to Europe to nest on Ireland’s east coast.

Perhaps the most beautiful of all terns, the snow-white seabird sports a jet-black cap and long tail streamers. They get their name from a soft glow of shell-pink on their undercarriage.

Ireland is crucial to European roseate terns; some 90 per cent nest at Lady’s Island Lake in Wexford and on Rockabill, off Skerries, Co Dublin.

This owes much to the diligent work of conservationists. “If we took away the management, their numbers would fall considerably,” says ornithologist Prof David Cabot of University College Cork. “They are on life support.”

It is working. When roseate numbers fell to less than 500 pairs in the 1990s, conservationists stepped in to lend them a hand. Last year, 1,556 roseate pairs were counted nesting on tiny Rockabill, 6km off the north Dublin coast. A European project (Roseate Tern LIFE) is under way to assist the birds further.

When the birds arrive in May, Birdwatch Ireland wardens will be waiting to monitor, tag, and protect them from predators. A few hundred terns had nested beneath sea mallow within the walled lighthouse garden on Rockabill, but the colony has expanded beyond the wall because of new, densely packed nesting boxes. “We now have a tiny island with about 700 to 800 nest boxes and 90 per cent of them occupied by roseate terns,” says Stephen Newton, conservationist at Birdwatch Ireland.

Predatory gulls, herons and owls raid tern nests, but this year EU funds will add to their protection. “We’re going to deploy devices to scare off the gulls, such as broadcasting distress calls of gulls,” says Newton, to knock out the habit of gulls hoping off boats on to the island to raid nests, before taking another boat back. The terns are safe on Rockabill from rats and mink, which can swim to islands closer to shore.

Roseate tern is the least aggressive of five tern species on these shores and invariably nests with common or Arctic terns. Getting roseate to recolonise some of their old haunts means encouraging those other tern species too, says Newton.

The other Irish colony is on islands in Lady’s Island Lake, a brackish lagoon in Wexford patrolled by the National Parks & Wildlife Service. The terns there contend with more than aerial predators. “The problem is rats can swim out to the island and eat chicks and eggs, and mink too can be a problem,” says Cabot.

The roseate’s nesting habits offer them protection. The 200 roseate terns share with hundreds of common and arctic terns and over a thousand pair of sandwich terns, the largest species here.

“Tern workers often wear hats for protection. Arctic terns will hit you with their legs and can peck your head,” says Cabot. Terns also nest alongside black-headed gulls; the gulls sometimes steal food and kill tern chicks, but in return are ferocious defenders against all nest raiders.

Protecting nest sites is essential. If disturbance by people or predators gets too much, terns will leave. “Terns are quite a long-lived species. They have a sense that if disaster is coming, something which threatens the adult breeding bird, they will fly off and forego breeding,” says Cabot. “They won’t hang around if rats or mink arrive.”

The loss of entire colonies has history. In the 1960s, there were more than 3,000 pairs nesting at over a dozen locations in Britain and Ireland. Colonies in Strangford Lough, Carlingford Lough, on Swan Island in Larne Lough, and Anglesey in Wales were abandoned, while the species disappeared almost completely from Scottish islands.

The birds once nested on Connemara islands, the Blasket Islands and Copeland Islands off Co Down. Victorian hunters, the millinery trade and egg collectors all took their toll.

Conservationists are delighted with Rockabill, but they worry that all our eggs are in two baskets. “If anything happened, say an oil slick off Rockabill during the breeding season, it would be disastrous,” Cabot says. The new European project will fund protection of colonies and encourage new colonies.

Lessons learned in Ireland are shared with the RSPB and the North Wales Wildlife Trust. The protections and boxes were copied on Coquet Island in the North Sea, where there are now around 100 roseate tern pairs.

“Most of that colony was founded by Irish birds,” says Niall Hatch proudly, development officer for Birdwatch Ireland. “We are trying to encourage the guys in Scotland and Wales to create mini Rockabills.”

Rockabill offers rich fishing grounds close by, where the terns catch small oily fish called sprat and sandeel. The number of chicks reared per pair though has fallen. “We don’t know if the range of these fish is changing or if the terns are finding it harder to find them,” says Newton. Terns have a distinctive fishing style, pausing almost motionless above the sea, before diving sharply into the water.

Cabot recently co-authored with Ian Nesbit a Collins New Naturalist book on British and Irish terns, but roseate terns are his favourites. “They are the most elegant of the terns, with really long streamers on their forked tails, which is why they were called sea swallows. They fly like bullets through the air,” he says. “They’ve got a pinkish glow, like as if the sun was setting on their chest.”

Roseate tern chicks will see their first sunrise from their Irish colonies in May. Egg-laying will start around May 18th and end by the first week of June.

This summer Birdwatch Ireland will attach geolocator tags to roseate terns on Rockabill. The birds are believed to winter off West Africa, but no one knows for sure.

“They are beautifully adapted for flying and will take these long migrations down to West Africa every year for 10 to 20 years,” says ornithologist and tern fan David Cabot. The tags are part of an EU-funded research project. These are the last terns to migrate to Ireland in spring, generally early May.

Their courtship ritual sees a pair ascend sharply in spirals before crossing and then zigzagging downwards again together. “The courtship of terns is something very beautiful,” says Cabot. “Males offer fish to females. Some fussy females won’t co-operate unless they are given food.”

Birdwatch Ireland recommends two places to see terns this summer. “We encourage people to come to Dalkey where we set up a telescope every week so people can see the common and Arctic terns there,” says Niall Hatch at Birdwatch Ireland. Late in the summer, terns from Wexford and Dublin feed around Dublin Bay and often roost on Sandymount Strand, though often far from the shoreline and late in the evening.

The second spot for tern watching is Kilcoole in Wicklow. “You’ve to walk a half a mile from the carpark down the coast but we have staff on hand to show people the little terns there. It’s a sensitive area, so we have it fenced off,” says Hatch. Little terns are the only Irish tern species that do not nest on offshore islands. Their Wicklow colony is vulnerable to foxes and human disturbance.