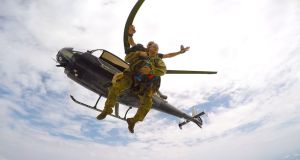 Paramount Group trains dogs to parachute from helicopters in tandem with a handler in search of poachers.

Electronic tracking or telemetry is a tool used to gain insight into species behaviour. Data gathered through this method helps to expand our knowledge on certain creatures and serves as a stepping stone to developing conservation strategies and informing policy. However, recent research indicates that it may be a double-edged sword.

A paper on research led by Prof Steven Cooke in Conservation Biology illustrates how poachers are using tracking technology to locate and kill the very species it was intended to protect. One method discussed is“cyber poaching”: the act of hacking into GPS collars to track down animals. The paper points to one notable – yet thankfully thwarted – attempt in India involving a Bengal tiger.

“With a simple radio tag, you can buy a receiver for $300 (€280) online, turn the dial until you hear the animal, and go and find it,” the biology professor at Ottawa’s Carleton University told The Irish Times.

Cooke and fellow researchers also looked at how other groups can abuse tracking devices. An example occurred in Banff National Park, where photographers used personal telemetry equipment to locate wildlife in their quest for a perfect snapshot. As a result, Parks Canada implemented a public ban on VHF radio receivers.

Data gathered through telemetry is often made publicly available by researchers, particularly online. The paper describes how open-access data can prove problematic, with the researchers stressing the need to “share data in forms that do not facilitate abuse”.

“Telemetry provides data that people find interesting and easy to understand but there are ways to tell a story without telling exact animal positions,” said Cooke.

Since the paper was released, many people have come forward with examples of tracking and data misuse. A conference on the issue will be held in Australia in June. “We wanted to get the community talking like this so we can act before it is too late,” said Cooke.

Chairman of the Golden Eagle Trust Ronan Hannigan said tracking is an extremely useful tool, especially for monitoring re-released birds. Though he does not view hacking as a threat here, the trust guards sensitive data, particularly with highly-persecuted animals such as peregrines.

To avoid interference, the Golden Eagle Trust strives to keep nest locations private. If information is leaked, however, they find it safer to make it completely public. “Most people become natural custodians for animals if they know they are there and so it becomes too risky for poachers to target them,” said Hannigan.

When deciding to reveal an animal’s location, Dr Colin Lawton from the NUIG zoology department, says he believes it should be treated on a case-by-case basis.

“It depends whether an animal is particularly sensitive to interference,” says Dr Lawton, who has used radio tracking to monitor squirrels without major issue. “We want to be open without causing a problem to the species. Overall though, I’ve a lot of faith in the public.”

While acknowledging that sharing animal locations on social media can prove problematic – an issue touched upon in Cooke’s paper – Lawton finds the tool beneficial for disseminating and collecting information.

Lecturer in wildlife conservation and zoonotic epidemiology in University College Dublin Dr Barry McMahon says that preventing the abuse of telemetry and data requires the management of people.

Whether studying Irish wildlife or a threatened species abroad, he feels this strategy is effective. “If a species is being poached, you must ask, Why are people poaching? They are probably in a terrible situation,” he said.“You would hope that, through working with these groups, they might find an alternative, more sustainable option.”

McMahon is a firm believer in open-access data. Though recognising its drawbacks, he feels legislation will eventually adapt to prevent abuses of this model.

Director of the National Biodiversity Data Centre Dr Liam Lysaght is “not aware” of examples of the abuse of telemetry in Ireland but he too stresses the need for risk assessment studies prior to research or disseminating information. While there is a “small suite of species” for which he feels the need to “blur data”, overall, he says that withholding data does more harm than good.

“Over the last 30 years, nature conservation has suffered tremendously in Ireland,” he said.“Data on rarer species has been restricted as people feel making it available might threaten them. This policy hasn’t helped conservation.”

In recent years, he has witnessed researchers becoming more open. This has raised the profile of certain species and is also key in issues such as informing planning decisions.

“Open access is the only way forward,” he said.“The transition from a protective attitude to an open one has been fundamental to what we do.”

PANEL: TAKING TO THE SKIES

Irish researchers may not view poaching as a concern for most native species, but it is a threat to others worldwide, particularly those perceived as valuable such as rhinoceros and elephant. In an effort to conquer poaching in South Africa’s national parks, global defence and aerospace company Paramount Group decided to aim high – literally.

The Johannesburg-based group recently began training dogs in their Anti-Poaching and Canine Training Academy to parachute from planes and helicopters in tandem with a handler. So far, one dog has been trained, with many more set to follow.

“With the African bush being such a vast wilderness and sometimes inaccessible via vehicle, it became clear that alternative methods of insertion must be considered,” said a spokesperson.“Parachuting enables getting the dogs on the ground as fast as possible.”

Though the parachute initiative is in its infancy, the canine anti-poaching unit has already seen success. One dog, Killer, and his handler have been responsible for the arrest of 115 groups of poachers in Kruger.

“These dogs have proven to be the most effective tool . . . [for] stopping or finding poachers,” said the spokesperson.“Before the use of dogs in anti-poaching operations, the success rate was extremely low due to the vast and dense bush. Today, almost every anti-poaching unit has dogs assisting them.“