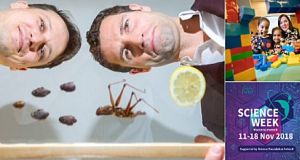 The weird and wonderful of Science Week: Jonathan McCrea, The Sugar Club, Dubland and others on show this week.

Public interest in science has reached a new high if Science Week 2018 is anything to go by as an unprecedented 1,200 events are being staged throughout the country.

The extent of curiosity is indicated by the level of participation in Science Foundation Ireland’s “stop and ask” social media initiative #StopAndAsk, now in its second year. The public are being encouraged to pose questions and leading Irish scientists are online to provide answers.

The variety of questions can range from the weird to the wonderful. And some of the #StopAndAsk questions already on the agenda include: “Could Spiderman really exist?”; “If I breathe in enough helium would I float?”; and “How does an autistic brain work compared to a neurotypical one?”

There are still some tickets remaining for tomorrow's special Science Week live recording of Dubland The Podcast at the Laughter Lounge. Get your tickets now for what promises to be a great night of laughter. https://t.co/sDGYZPK0dt

Get your tickets for #ScienceWeek events before they sell out here: https://t.co/SeW8W7uVqr We have lots of science questions and laughs with @dublandpodcast; a sensory science food experience with @ivanvarian & @jonathan_mccrea; and our spectacular Family Fun Day in @TheCCD pic.twitter.com/MhAtY7zEp4

Among the Science Week events:

Many schools are staging their own science events to showcase the importance and fun in science. The idea is to make the discipline more accessible to children and prepare them for what they can expect in the junior and senior cycle. The importance of STEM subjects is also emphasised (science, technology, engineering and maths).

RTÉ One will show Growing Up Live, an insight into the extraordinary development of humans from birth to death, presented by Angela Scanlon from an anatomy museum in Dublin. It will air at 7pm nightly from Tuesday to Thursday.

Minister for Innovation Heather Humphreys said Science Week is an opportunity to shocase the “tremendous advancements in Ireland in recent years, with strides made in the technological and scientific spheres. In Ireland, we have some of the world’s top researchers and Science Week will allow the public the chance to discover the answers to the world around them.”

SFI director general Prof Mark Ferguson stressed Science Week’s aim in bringing science “to the fore of the public’s minds through fun, engaging and interactive events of interest to people of all ages”.

A full listing of events is at scienceweek.ie.