Why planting trees could be bad for Ireland’s hen harriers 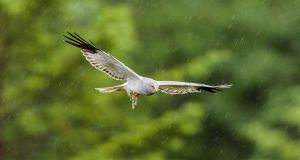 The hen harrier: A 2015 survey estimates that 108 to 157 breeding pairs remain, an 8.7 per cent decline in confirmed and possible pairs since 2010. Photograph: Mike Brown

The twists, tumbles and turns of a hen harrier’s sky dance are a spectacle not everyone has been lucky enough to witness in recent times. Yet while it exists only in poetry or memory for many, for others, the species remains centre-stage.

Undertaken by the Golden Eagle Trust, Irish Raptor Study Group (IRSG) and BirdWatch Ireland on behalf of the National Parks and Wildlife Service, the fourth and most recent National Survey of Breeding Hen Harrier in Ireland in 2015 estimates that 108 to 157 breeding pairs remain. This represents an 8.7 per cent decline in confirmed and possible pairs since 2010.

Survey data, along with other research and the views of relevant sectors, have helped to inform a draft Hen Harrier Threat Response Plan (HHTRP), which aims to outline actions for securing the bird’s future. Prepared by the Department of Culture, Heritage and the Gaeltacht in cooperation with three other departments and a stakeholder consultative committee over five years, the draft plan was scheduled for public consultation in October.

However, the IRSG and BirdWatch Ireland – who are on the consultative committee – have expressed concern with the draft in its current form, saying it does not acknowledge scientific research. Chairman of the IRSG Ryan Wilson-Parr says their primary concern is a proposal to consider further afforestation within hen harrier special protection areas (SPAs).

“Habitat loss due to forestry is detrimental to the hen harrier so any further afforestation in protected areas, which already have 52 per cent forestry cover, isn’t going to help the hen harrier at all.”

Hen harriers breed in open, upland habitats including heather moor, bog and scrub. While they can use young conifer plantations for nesting and foraging, as plantations mature and the forest canopy closes, this habitat becomes unsuitable for nesting and hunting. There are also concerns over increased risk of predation for forest-nesting harriers. Forest maturation since SPA designation could explain why there are now more breeding harriers outside SPAs than within them.

While saying a threat response plan is “an appropriate mechanism to implement effective conservation strategies for hen harrier”, raptor conservation officer with BirdWatch Ireland John Lusby outlines similar concerns about non-native forestry. “In [the draft’s]current form, it leaves the door open for further afforestation and from a conservation point of view, that absolutely cannot happen.”

Both refer to research conducted by UCC, which found that hen harrier breeding success can decrease noticeably when the percentage of second rotation pre-thicket forest in the surrounding landscape is above 10 per cent. Another UCC study concludes that a maximum threshold of 40 per cent total forest cover within the SPA network is required to keep second rotation pre-thicket forest at this level.

Therefore, while forest removal and connecting foraging habitat can be beneficial, Lusby says forestry within SPAs is already too high to consider further planting.

Chair of the HHTRP, Dr Ciaran O’Keeffe of the National Parks and Wildlife Service, says feedback received from all of the players involved in the plan is currently under review.

“What we have to do is work our way through them to do a complete reply to the committee. Where we have things we can do, we will do them,” says O’Keeffe, who underlines the plan must be science-based.

While he says it would be “premature” to comment on individual aspects of the draft version of the plan, O’Keeffe stresses that no submissions will be ignored, whether from landowners or environmental NGOs. However, he does note that the issue is complex and that accommodating everyone’s interests can be difficult.

Indeed, balancing all interests has been a notoriously hard task, as widely highlighted within the agricultural sector.

Since the designation of hen harrier SPAs in 2007, many of the approximately 4,000 farmers with designated land have been outspoken about their grievances. The reallocation of funding originally designated for landowners in Natura 2000 sites, and the later ban on new forestry within these areas, meant that their land was considered worthless.

Shane McAuliffe, who has farmland within the Stack’s to Mullaghareirk Mountains SPA, on the Limerick, Cork and Kerry borders, says farmers like himself have been left with no options. “We have this land and it just sits there, it’s worthless. In the past, I have applied for afforestation grants and it has been declined. We don’t even graze cattle on it, the land is so bad.”

McAuliffe notes the association between non-native forestry and hen harrier decline and says if permitted, he would only consider native forestry.

“I’d love to plant native oak or alder to give a bit of biodiversity to the area,” he says. “We have 20 acres of Sitka spruce on our land and I hate it. You go through it and there’s no wildlife, there’s nothing going underneath the forest canopy, it’s just dead.”

He feels the European Innovation Partnership locally-led Hen Harrier Project may provide hope to both farmers and the hen harrier. While he wasn’t accepted into the first round, he hopes to get into the next.

“What farmers would like to see is that the role that they play in enhancing the environment is properly rewarded,” says Gerry Gunning of the IFA, who’s also hopeful about the new project.

The €25 million pilot project, compatible with GLAS and GLAS + and funded under Ireland’s Rural Development Programme 2014-2020, financially rewards farmers who manage their land in a manner that benefits the hen harrier.

Just under 700 farmers have been offered contracts since it opened in December 2017, with up to 1,200 participants expected by next summer. The project is universally welcomed, though Lusby notes such schemes would provide greater landowner security and conservation benefits if it were long-term.

There’s also still plenty we don’t know. While the focus within SPAs is breeding hen harriers, O’Keeffe and Wilson-Parr both note we need more research on hen harriers in their wintering sites.

Looking ahead and working together is clearly what’s needed to increase hen harrier numbers but whether that’s possible remains up in the air.

On a visit to the Slieve Bloom Mountains, it’s quite possible to avoid seeing another being for miles. Forestry extends across the slopes; in fact, it covers 62.8 per cent of the SPA.

Considering what’s known about the hen harrier and forestry, it’s surprising to see in the 2015 survey, National Survey of Breeding Hen Harrier in Ireland, that breeding pairs in this SPA have increased. However, this is likely due to the existence of protected heather moorland habitat, where the majority of pairs have been nesting.

“This SPA has a nature reserve taking up a big part of it so it is managed optimally, whereas in many others, this is not the case,” says O’Keeffe.

Lusby echoes this, saying this SPA should be looked at in isolation.

“In one way, it does show that the population will respond to positive management but it’s not possible to compare like for like.”