Foiling fatbergs, the elephants in the sewer 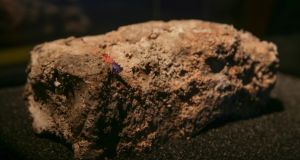 Your research centres on fatbergs that clog sewers. Let’s get the gross stuff out of the way, what’s in a fatberg?

Fatbergs are blockages that build up in sewers, and they combine fats, oils and grease that typically come from the sinks of houses and restaurants, along with other things that turn up in sewers, like wet wipes or sanitary products that people flush down the toilet.

Delightful. How large are these congealed clumps?

It varies but fatbergs can get really big. There was one in London recently that weighed in at a record 130 tonnes, which is the equivalent of about 19 African elephants. The previous record for a fatberg was 15 tonnes, which was the size of a bus; again found in a London sewer.

And what kinds of problems do they cause?

Well the idea of a sewer is that waste keeps moving through it, but if a fatberg blocks the sewer, then the waste moves more slowly or stops altogether and begins to back up, and you might get sewage bubbling up through outlets to the surface or into rivers and causing environmental damage.

Obviously this is not what we want, so where a fatberg is clogging a sewer it has to be removed, often manually by people with shovels and high-pressure jets. This is not easy work and it can be dangerous for the people involved because of the gases that can be emitted from waste breakdown in sewers.

How is your research looking to help?

I am developing a warning system to figure out when fatbergs are developing so that they can be dealt with early on, before they cause major disruption.

How are you doing that?

In two ways. One is to develop a method to identify where a fatberg is more likely to form, which might be in an area with a lot of restaurants where fats, oils and greases could be going into the waste pipes. We can map those kinds of hot spots along with the bore or diameter and the condition of the sewage pipes to work out the high-risk areas.

I am also developing a system that uses sensors to detect if sewage is starting to back up or slow down in pipes, which could indicate that there is a problem brewing.

You will be heading to the US later this year to advance the project, what will you be doing there?

I have a Fulbright TechImpact Award for this project, so I am going to North Carolina State University to work with Prof Joel Ducoste on combining the risk and sensor-based approaches.

Are there things we can do every day to reduce the risk of fatbergs in our area?

Yes. Restaurants in Ireland now have to comply with regulations to have grease traps fitted, but at home the trick is to minimise the amount of fats, oils and grease going down the sink. So, if there are residues on pans and oven trays, let them cool and wipe them off and into the bin rather than pouring them down the sink. And don’t flush wet wipes down the toilet.

Finally, when you are not seeking to avert fatbergs, how do you like to take a break?

I have recently been inspired by my teenage daughter’s love of birds to take up bird watching. I did not realise how many birds are around us until I started observing them more closely, and it can be very relaxing too.”