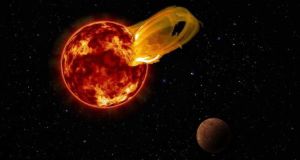 Red dwarf: an artist’s impression of a flaring star and a nearby planet. Illustration: Roberto Molar Candanosa/Carnegie/Nasa

Astronomers at Ireland’s giant new radio telescope say it has already reached a milestone, just eight months after being officially switched on: it has observed for the first time a nearby flare star called CN Leo, believed to have come into being a billion years ago.

Stephen Bourke of Onsala Space Observatory, in Sweden, and Aaron Golden of NUI Galway, working with an international team, succeeded earlier this month in catching the stellar flare exploding in the star’s atmosphere.

They are using I-Lofar, the low-frequency radio telescope at Birr, in Co Offaly, and the international array of such telescopes to which it belongs to understand how such flares evolve and how they compare to solar flares.

CN Leo is a small red dwarf star about 7.9 light years – almost 75 trillion kilometres – away, in the constellation Leo, and is likely to have a planetary system, according to Dr Golden. Studying how such stellar flares occur, and how they interact with their local environments, using Lofar, the Netherlands-based international network of radio telescopes that the Birr facility is part of, “offers a new window on this important area of astronomy”.

“In fact we now know that the vast majority of stars in the galaxy that have planetary systems that could harbour habitable planets orbit red dwarf stars like CN Leo. So a really important question to answer is whether or not such planets could survive the very powerful stellar flares we see from many of these red dwarfs.”

Catching a flare with a radio telescope does not yield photographs in the way an optical telescope would provide images of space. It’s more like recording ripples in a pond, according to Dr Golden, and requires “a fair amount of computing power”. So, with much anticipation, they are awaiting full details of the recording of CN Leo’s latest stellar “burp”, which should be available in the coming weeks, after their data has been processed by a supercomputer in the Netherlands.

CN Leo is very close to Earth – “down the road, astronomically speaking” – and although such flaring stars are very common, this one is of interest because it came into existence “when life got it together”; it also facilitates the study of flares’ affects on planets. “Fifty years ago this was the stuff of science fiction. Now it’s reality.”

Nasa scientists have generated graphic images of flaring red-dwarf stars – the equivalent of what one would see from the bridge of Star Trek’s Starship Enterprise, said Dr Golden, who is based at NUIG’s school of mathematics.

The Irish observations were taken as part “a search for auroras on nearby flare stars using Lofar”, which involved simultaneous observations from e-Merlin, an array of radio telescopes across central and northern England; the Liverpool Telescope, in the Canary Islands; and Nasa’s space-based Neil Gehrels Swift Observatory.