A journey through hairstyles and scientific discoveries 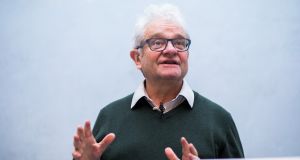 It’s not every day you meet a Nobel prizewinner, and members of UCD Biological Society were clearly excited to have English geneticist and cell biologist Sir Paul Nurse on the Belfield campus. He was there to talk about his work, and to receive the inaugural George Sigerson award for “inspiring aspiring” scientists.

Dressed in a woolly jumper and casual trousers, Nurse is a relaxed, engaging and humorous speaker. In the O’Brien Centre for Science, he took the audience on a whistle-stop tour of the discoveries that led to him being jointly awarded (with Leland Hartwell and Tim Hunt) the Nobel Prize for Physiology or Medicine in 2001.

Astonishingly, he doesn’t even mention the Nobel prize in his 40-minute presentation but instead shows students photographs of himself with various hairstyles (from the 1960s through to the 1990s) interspersed with hand-drawn diagrams of his discoveries of how the cell controls its cycle of growth and division.

Working with fission yeast, Nurse’s key discovery was how the cdc2 gene encodes a protein kinase enzyme that ensures the cell is ready to copy its DNA and divide. He jokes about how the world wasn’t interested in these findings until he could replicate them with human genes. However, once he did replicate these findings in human genes, they became very significant because errors in cell growth and division can lead to cancer and other serious diseases.

Speaking about the painstaking detail of genetic research (particularly before genetic cloning was established in the late 1970s), Nurse stresses the importance of being open to chance discoveries. “You must leave space for serendipity. When you are too driven by hypotheses and is too mission oriented, you’ll only find what you’ll expect to find,” he says.

The key skills required for scientific researchers, according to Nurse, are self-confidence, self-criticism and the ability to fail. “When you work at the forefront of something, you fail all the time. You’ve got to be psychologically tough to deal with failure. My approach to failure gave me a very successful career,” he adds.

In fact, Nurse failed to get into the universities of Oxford, Cambridge, Sussex and York because he didn’t have a foreign language, and was accepted into the University of Birmingham on condition he study French. He pursued post-doctorate work at the University of Bern in Switzerland, Edinburgh University and Sussex University.

Over the past 30 years, Nurse has held many senior research leadership roles. He was president of the Royal Society, director general of Cancer Research UK, and since 2011 he has been the director and chief executive of the UK Centre for Medical Research and Innovation – now the Francis Crick Institute of biomedical research.

During all this time, he has maintained an active interest in laboratory work. He says that while the budget for science in Ireland is at a reasonable level, he believes there is too much emphasis on applied research. “There’s not enough money going into discovery on the spectrum of research from discovery to translation to applications. In the UK, we still have enough money for discovery research.”

A member of the British Labour Party for more than 40 years, Nurse is adamant scientists should speak out in public affairs and challenge politicians who support policies based on pseudo science. “I appeal to the virtues of the Enlightenment. There is a need for rational thought and reliable evidence. When people are driven by politics and ideology, reliable evidence can get lost – especially with the rise in populism,” he believes.

Taking climate change science as an example, he says “there is almost no range of scientific opinion on climate change, yet people find ways to manoeuvre into different positions. Rather than have a political debate on what needs to be done in terms of regulation and industrial changes to prevent dramatic and cataclysmic effects, they try to attack the science.”

He is more concerned by political leadership in the US than in Europe though he believes Brexit is “extremely bad for society and scientists”. “Trump is a serious problem because he doesn’t understand logic and rational evidence. The [political] leaders in Europe are better, but I’m on the lookout for an Irish relative because of Brexit,” he says, half jokingly.

He is also outspoken about human embryo research. “New methods for correcting diseases caused by single genes are accurate, but embryo work is fraught with moral challenges. To turn our backs on therapy that will stop people suffering and dying isn’t morally acceptable. So, we need to have that debate now before therapies are fully developed.”

He also believes science teachers need to teach students how to discuss science. “We need to emphasise why the scientific process is such a reliable generator of knowledge with its respect for evidence, for scepticism, for consistency of approach, for the constant testing of ideas.”

On a personal note, he says his interest in science began in childhood with his fascination for wildlife and astronomy. “When I went to university, I was going to study ecology but [the field experiments] were too cold so I shifted to molecular biology. I have an almost unhealthy curiosity about the world and I still get incredibly excited about new research.”