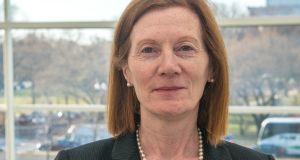 At an event at the US Institute of Peace in Washington on Wednesday, Mr Varadkar said he was delighted to recognise two inspiring leaders who were contributing significantly to research and innovation but also members of the Irish diaspora.

He also acknowledged their role “in supporting and engaging with the research ecosystem in Ireland”. Presented annually, the medal is awarded to a distinguished Irish scientist, engineer or technology leader living and working in the US.

Prof Murnane was born in Limerick and is one of the most acclaimed research-active physicists in the US. She has designed some of the fastest lasers in the world.

Her lasers are so fast they make it possible to record the motions of atoms in chemical reactions. A laser built to her design was central to the success of researchers who shared the Nobel Prize in Physics in 2005. It has enabled major advances by allowing researchers to image particles in science research, medicine and technology.

She also created “a table-top affordable X-ray laser” allowing the wider research community to harness the potential of X-rays.

Prof Murnane said: “My passion and love for physics first came from my father who was a teacher, and this grew when I attended UCC . . . the education I started in Ireland and continue to develop in the US has allowed me to follow my interests and create technology and systems which can be used across different areas of research in both countries today.

“As an Irish citizen living in America, it heartens me to see the continued collaboration between the two countries to ensure the research community in both Ireland and the US can produce the very best work.”

Speaking to The Irish Times, she said “science is more and more a team exercise”. In her case it included her husband Prof Henry Kapteyn, a life-long collaborator, and a big team of students.

Reared near Castleconnell, she said her career path was only possible because of the Irish tradition of valuing education and learning.

A holder of Irish citizenship and with a home in Co Clare, David McCourt has been “active in Ireland’s academic ecosystem” for many years and in the Government’s Global Economic Forum.

Early in his career he developed technology that lowered the cost of building digital cable systems which become the industry standard. He went on to found the network and telecommunications company Granahan McCourt Capital. In Ireland, he has also been helping provide access to broadband through Enet, which operates next-generation, open-access telecoms infrastructure.

He is chairman and the main shareholder in Enet, the last remaining bidder for the national roll-out of broadband.