DCU scientist to develop ‘micro-vehicles to navigate through body to ... treat diseases’ 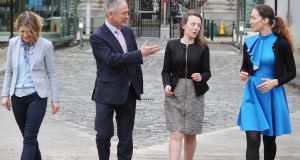 The Government has moved to substantially increase “frontier research” by allocating €30 million to third level institutions in 36 projects approved by the Irish Research Council.

Details of the council’s inaugural “Laureate Awards” were announced by the Minister for Education and Skills Richard Bruton, who confirmed they were in response to a gap identified in critical basic research being conducted in Ireland.

Innovation 2020, Ireland’s five-year strategy for science and technology, research and development, had identified a significant gap in the Irish research and innovation landscape in the area of frontier basic research, he said.

“The Laureate Awards scheme was designed specifically to address this gap, and the IRC has, through the programme, identified a wealth of clearly talented researchers with brilliant ideas,” Mr Bruton added.

“Frontier basic research is very much at the cutting edge of new knowledge. It is research that is daring, that pushes boundaries, and that moves beyond the frontiers of our current understanding,” he said at the launch of the awards .

A total of 36 researchers will receive funding under the new scheme to conduct ground-breaking research across life sciences; physical sciences, engineering, the arts, humanities and social sciences.

Among the first awardees are:

- DCU scientist Dr Larisa Florea, who is to develop “micro-vehicles to navigate through the human body to recognise, diagnose and treat a variety of diseases”;

- Dr Jacopo Bisagni of NUI Galway who is researching how intellectual exchanges between Ireland, Brittany and Francia during the Carolingian age (circa AD 750-1000) which “laid the foundations of Europe as we know it”; and

- Dr Dawn Walsh, based at UCD, who is to explore the role played by independent commissions in peace processes.

IRC director Peter Brown said supporting research that pushes out the frontiers of knowledge was a key priority of the council. “With the establishment of the Laureate Awards we are taking steps to ensure exceptional individual researchers are supported to achieve world-class standing in their respective areas of expertise.”

An independent international panels that assessed applications for the Laureate Awards were extremely impressed with the quality of individual researchers in the Irish research system, he said. “With continued investment in frontier research across all disciplines, Ireland will reap benefits for the long-term and will leverage greater success in European research programmes, in particular the European Research Council. ”

Minister of State for Training, Skills, Innovation and Research and Development John Halligan said frontier research was key to developing the bedrock of knowledge necessary for social, technological and environmental progress. “We would not have devices like mobile phones, or indeed the internet, without frontier basic research. Innovation 2020 targets Ireland to become an Innovation Leader, and the investment is a very positive step on the way to achieving this.”

It was essential this tranche of funding be further supported by increased investment as part of the Government’s ambition to grow our research funding from the current level of 1.5 per cent of GDP to in excess of 2 per cent, he said. “Sustained investment in research is the best possible foundation for future economic growth,” he added.

The Department of Education is providing a further €12 million for a series of advanced grants under the programme for senior researchers who will have the opportunity to compete for grants of up to €1 million over four years.