16th century battles on the frontier of mathematics 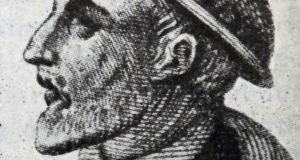 Western civilization woke with a start after the slumbers of the medieval age. Universities in Bologna, Oxford, Salamanca, Paris and elsewhere began to flourish. In the early 16th century, several Italian Renaissance mathematicians struggled to solve polynomial equations, in which the unknown quantity x enters in the form of powers: that is, x multiplied repeatedly by itself. Babylonian mathematicians knew how to solve simple linear and quadratic equations: when only x appears, we have a linear equation; if x-squared enters, we have a quadratic. The third power of x yields a cubic equation and the fourth power a quartic. Euclid discussed the solutions of linear and quadratic equations in geometric terms in his Elements, but there were no further advances for 1,000 years. The Romans contributed precisely nothing to mathematics. The solution of cubics and quartics was the first substantial advance in mathematics in Europe since the days of the ancient Greeks.

In 1494, Luca Pacioli, an Italian Renaissance mathematician and friend of Leonardo da Vinci, published his Summa de Arithmetica, giving solutions for linear and quadratic equations. He stated that no general method of solving cubic equations was known and that probably no such method was possible. This acted as a spur to other mathematicians to find a solution.

The first successful attack on cubics was that of Scipione del Ferro. He held the chair of mathematics at the University of Bologna. He kept his method secret: such knowledge was valuable, as it could ensure victory in public challenges, which were issued from time to time. Del Ferro revealed his method to his student, Antonio Maria Fior. He also kept a notebook which, after his death, passed on to his son-in-law, Hannibal dell Nave.

An injury in childhood left Niccolo Fontana, a gifted mathematician, with a speech impediment which resulted in his nick-name, Tartaglia – the Stammerer. Tartaglia, unaware of the work of del Ferro, found a solution method for cubics which have no linear term. But he was initially unable to solve “depressed cubics”, those without a quadratic term.

In 1535, Fior challenged Tartaglia to a mathematical contest. Each man submitted 30 problems for the other to solve. After a hectic struggle, Tartaglia discovered the solution method for depressed cubics just eight days before the deadline and solved all Fior’s problems. The performance of Fior, who was of indifferent ability, was dismal, and he faded ignominiously from public view.

At this point, Gerolamo Cardano entered the fray. Born in Milan, he was a keen gambler and his understanding of the laws of chance enabled him to make a profit on this enterprise. His book, Games of Chance, is the earliest serious study of probability. Cardano heard of Tartaglia’s great triumph and was determined to discover his method. He wrote repeatedly to Tartaglia, begging and cajoling him to reveal his secret. In 1539, Tartaglia divulged the formula, after Cardano swore a solemn oath never to reveal it.

Cardano made rapid progress in solving the remaining species of cubic equations. His brilliant student Ludovico Ferrari then discovered how to solve quartic equations. But since Ferrari’s method reduced a quartic to a cubic of Tartaglia’s type, the oath that Cardano had sworn prevented him from publishing it. However, in 1543, Cardano and Ferrari travelled to Bologna where they had access to del Ferro’s notebook. Finding that Tartaglia’s solution method had been discovered earlier by del Ferro, Cardano felt released from his oath and published the methods for both cubic and quartic in his masterwork, Ars Magna.

The culmination of the affair was another public contest. It was on the home turf of Cardano and Ferrari in Milan, and such was the hostile atmosphere that Tartaglia fled from that city, lucky to escape physical abuse. Later, it became evident that Ferrari had posed a problem that he himself could not solve. Presumably, he was fishing for information, behaviour described by Tartaglia as “a very shameful thing”.