Experimental atmospheres: When temperatures rise, what will grow? 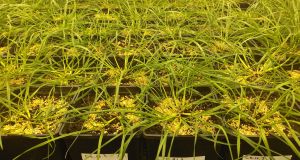 Agricultural research in Ireland is increasingly seeking out new ways to deal with the environmental pressures of climate change. Met Éireann predicts that our national annual mean temperature will rise by 1.5 degrees over the next 30 years, alongside an increase in the frequency of extreme events such as storms, heatwaves and drought.

Moreover, the IPCCs 5th assessment report, the world’s main body determining climate change impacts, predicts significant decreases in crop yield around the globe, including in Ireland. For the agricultural sector this poses challenges in adapting to new environmental constraints, not least for the cultivation of crops, a problem which is now the focus of a number of research groups across the country.

At University College Dublin’s Programme for Experimental Atmospheres (PEAC), a project called Futurye has been designed to look at the growth of ryegrass in the warming climate of the near future.

“The agri-food sector in Ireland is currently employing 50,000 people directly and provides the primary outlet for the produce of 128,000 family farms,” says UCD’s Dr Charilaos Yiotis, who is leading the research.

“These jobs are dispersed throughout all regions of Ireland, meaning the agricultural sector plays a key role in maintaining a sustainable rural development,” he says. “So, the threat that climate change poses on Irish agriculture has both economical and sociological dimensions.”

According to Dr Yiotis, ryegrass is the most common grass used in productive pastures in Ireland, and is the country’s most important forage grass, accounting for 95 per cent of all grass seeds sold in the country.

Using state-of-the-art growth facilities, Dr Yiotis and other scientists at PEAC grow various genotypes of ryegrass in controlled experimental atmospheres thought to be representative of the future. By increasing carbon dioxide and temperature, and by changing water availability in the soil, the researchers are aiming to identify key traits associated with increasing ryegrass productivity and resilience in our new climate.

“We anticipate that the research will result in breakthroughs in the field of plant biology and especially crop science,” he says, “putting Ireland at the forefront of crop research.”

Research at Teagasc is also focussing on rye-grass. According to Dr Susanne Barth, senior research officer in plant genetics, researchers are working on improving spring growth in perennial ryegrass, and identifying reasons why certain varieties make better use of amenable warm days and sun rays in spring.

“For this research I am using plant physiological and genetics approaches,” says Dr Barth. “Another research interest is to investigate the option of introducing hybrid breeding in perennial ryegrass to make quicker decadal yield gains.”

But there is a catch. Climate change campaigners rightly point out that agriculture is Ireland’s leading contributor to climate change, meaning the agricultural research framework is a complex one for Irish society.

On the one hand, agriculture employs tens of thousands of workers and helps to feed the nation, but on the other it prevents the nation meeting its emissions reduction quotas, because methane, a byproduct of animal agriculture, is a potent greenhouse gas.

“The challenge is to meet the world’s growing food requirements with reduced inputs and in a sustainable way,” says Dr Yiotis. “Much of the greenhouse gas emissions are associated with livestock production systems that produce methane, so this is a key issue.”

Dr Barth points out that if we can produce good quality home-grown feed and food, our carbon footprint is reduced by avoiding long and unnecessary transport.

There may also be new methods on the horizon which aim to reduce the climate impact by breeding crops for animal feed, she says – crops which would in theory reduce animal methane emissions by altering the digestion process.

What’s clear is that any investigation into future crop research will need a focus on reducing climate impacts at the same time. According to Dr Barth, this will require a deep knowledge of the production processes in the agricultural sector.

“By knowing our production systems well,” she says, “we can influence reduction in greenhouse gas emissions by optimising land use.”

Conor Purcell is a science journalist with a PhD in Earth Science. Twitter @ConorPPurcell and cppurcell.tumblr.com

“The study of plant responses to climate change requires the use of Free Air Carbon Dioxide Enrichment (FACE) facilities, or state-of-the-art growth chambers in which all the environmental variables – that is carbon dioxide, temperature, humidity and light intensity – can be controlled,” explains UCD’s Charilaos Yiotis.

The chambers can host a range of atmospheric compositions, climate regimes and light intensities which can be used to simulate the climate future. The facilities can also be used to simulate climates of the past and test assumptions made about plants and atmospheres throughout geological time.

According to Dr Yiotis: “The facility is unique in the sense that it is the only in the world that can simultaneously control three atmospheric gasses – oxygen, carbon dioxide, and sulphur dioxide – and therefore represents a major technological advance.”