When the government invaded our kitchens

Governments have a long history of interest in their citizens’ diets 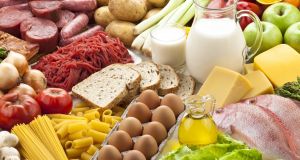 January is the month when we try to compensate for the season of excess with weeks of deprivation. The more sensible among us revert to the only dietary advice that has never fully gone out of fashion: moderation. Many of us will become prey to the circling vultures of fad diets or extreme exercise programmes.

The Department of Health launched a new food pyramid in December, perhaps in an effort to upstage the often dubious nutritional advice we usually receive at this time of year. Its most radical change was to place fruits and vegetables at the bottom of the pyramid (instead of grains) and to strongly suggest that foods high in salt, fat, and sugar should be consumed only once per week.

Before you calculate how many years worth of salt, fat, and sugar you consumed in December, it might be worth considering the history of governmental interest in your diet.

While nutrition was always a concern of medicine, diet emerged as a public health concern most strongly in the 20th century. Driving this interest were social and scientific changes.

In science, a greater understanding of the chemical components of food was coupled with physiology to change how scientists understood the process of converting food into fuel for the body. The discovery that certain compounds in food (named “vitamins” in 1906) were necessary to prevent disease is one example. The two World Wars led to widespread concerns in Europe and America about the health of young men and the effects of food shortages.

During the 1930s, governments, scientists and the health committee of the newly established League of Nations used this research to set down nutritional guidelines. Although the daily requirements for calories and trace nutrients have been modified, a food package label essentially rehearses this way of thinking about dietary health.

The report (published in parts up to 1953) boldly stated that “a food policy to ensure proper nutrition for all sections of the population must be considered as an integral part of the general policy of public health”. To guide such a policy, the survey attempted to determine what the nation was eating and how it might be improved. The survey covered rural and urban dwellers of all classes, although a special emphasis was placed on the poor living in the Dublin slums and in the “congested districts” of rural areas.

The survey studied almost 3,000 families by sending female investigators to interview housewives and weigh and measure all the food in the house. The investigators returned at several weekly intervals to weigh and measure food. The nutritional components of these foods were calculated and used to determine whether members of the household were getting enough calories and nutrients.

Most families consumed sufficient calories, but the authors of the report were not happy with their diets. People consumed far more sugar per week (by weight) than they did fruit. Vegetables other than the potato were limited. The report suggested that nutrient deficiencies were being masked by the high levels of nutrients in the black bread (with 90 per cent of the grain included) produced to cope with a shortage of wheat.

Reliance on so-called “bread and spread” meals was high. In the Dublin slums, for example, nearly 50 per cent of all meals consisted of bread and spread, whereas in the congested rural districts a reliance on bread and spread varied with the seasons, but was still alarming: often only one meal per day contained vegetables and protein.

These districts also had the lowest rate of meat consumption in the entire country. Poverty in postwar Ireland was a barrier to proper nutrition for all, but the report also suggested that education could help to improve diets by suggesting which foods were most nutritious.

Despite a widespread interest in nutrition for public health, governments across the world have had more success in recording diets than in changing them.

In 1992 the United States department of agriculture created the food pyramid in order to represent what proportion of people’s diets should be made up of different types of food. The pyramid has since been debated, adjusted and copied in other countries (including Ireland), although its level of influence on our food intake is open to question.