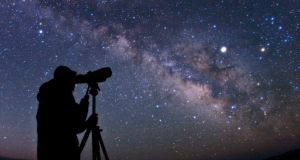 Whether or not we are alone in the universe is one of the biggest questions confronting science. The fact that we have detected no evidence of alien intelligent life indicates that, on the face of it, alien technological societies are either non-existent or vanishingly rare in our Milky Way galaxy.

However, in a most interesting article in Scientific American, January 2020, astrobiologist Caleb Scharf suggests the reason we have no evidence of alien civilisation is because we live on an out-of-the-way planet during a lull in the periodic waves of spacefaring explorations by alien civilisations.

In 1950, Italian physicist Enrico Fermi (1901-1954) calculated that alien technological civilisations have had enough time, even travelling at a modest fraction of the speed of light, to colonise all habitable regions of the Milky Way galaxy. Fermi famously and reasonably asked: “But, where are all the aliens?”

Of course, as Scharf points out, aliens may have visited Earth and set up home here millions of years ago and then either died out or left. If true, we would probably never know because time since would have erased all signs of alien technological life on Earth.

Speculations about spacefaring aliens rely on assumptions that we cannot be sure are true but that nevertheless seem reasonable:

A. Such speculation is only meaningful if alien civilisations actually exist. However, extrapolating from what we know of life on Earth, it seems very likely that intelligent life has also commonly arisen elsewhere in the universe.

B. If aliens exist they must be motivated to travel or else we could never see them. However, many alien civilisations would be motivated to travel deep into the galaxy if they resemble us humans. We are already probing our solar system out of curiosity and will undoubtedly venture further when the enabling technology is developed. Of course, necessity would provide motivation to travel in addition to curiosity, eg to escape a planet rendered uninhabitable by environmental degradation.

C. Alien civilisations hoping to travel significant galactic distances must possess some pretty awesome technology. Scharf points out that even to travel at 10 per cent of the speed of light requires, for example, fusion-bomb propulsion or enormous laser-driven light sails. But our human experience is that such technology would be developed over time.

D. We also assume, but cannot know for sure, that aliens (and humans) would be able to survive long-term space travel, possibly lasting for centuries.

One possible reason that Earth apparently has not been visited by aliens to-date is that we may be located in a lonely part of the galaxy with very few other inhabitable planets in our galactic neighbourhood. Spacefaring aliens seeking out habitable planets across the galaxy would surely head for regions known to be rich in such planets – archipelagos of life-friendly planets – probably in waves of exploration. Stars in our galaxy move about like molecules in a gas and we may have to wait until our solar system moves into an archipelago of life-friendly planets before anticipating the arrival of aliens.

Scharf likens our possible situation on Earth to that of Pitcairn Island in the Southern Pacific Ocean, one of the loneliest habitable places on earth, separated from its nearest neighbour islands by hundreds of miles of open water. On January 19th, 1790, 19 mutineers from HMS Bounty, 18 Tahitians and one baby arrived on Pitcairn Island.

Before the Bounty mutineers arrived, Pitcairn Island had been uninhabited since the 1400s, when Polynesians lived there, but that community died out when natural resources ran low and conflicts interrupted trade and supply lines with other islands. After the Bounty mutineers arrived, 18 more years passed before another ship visited Pitcairn Island.

And so, Scharf’s take-home message is that even if the galaxy is teeming with alien life, it is not necessarily surprising that Earth has not been visited yet.