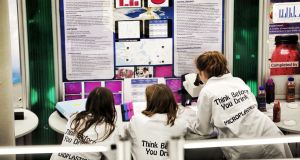 The dominance of projects on mental health issues for young people and climate change is the standout feature of 550 projects that will feature in the 2020 BT Young Scientist & Technology Exhibition (BTYSTE).

Selected from more than 1,800 entries, these projects come from 244 schools across 31 counties – almost 60 per cent of 1,125 students whose work will be exhibited are female.

As the organisers of the event delivered the good news over the past week, qualifying students have already begun preparing to exhibit their projects in the 56th staging of the exhibition from January 8th in Dublin’s RDS.

A significant number of the projects this year delve into pressing social issues such as mental health, transgender rights, vaping impacts and the effects that social media has on young people both from a physical and psychological perspective.

These topics dominate the social & behavioural science category but are also increasingly prevalent in the other three categories of technology; chemical, physical & mathematical sciences and biological & ecological sciences. A total of 116 projects investigate of the impact of technology on people’s lives, with a focus on big data in many cases. Some 16 per cent of projects relate to health and wellbeing.

A total of 335 entries related to climate change, many of which address public attitudes towards and knowledge of the consequences of global heating. A number focus on the propensity to change behaviours to mitigate the effects of climate breakdown. There are also a high number of investigations into localised impacts of climate change including biodiversity decline.

BT Ireland managing director Shay Walsh said this year’s qualifying projects reflected a global trend, “where young people are leading the charge when it comes to taking action on issues such as climate change and confronting mental health”.

He said he was encouraged about Ireland’s future seeing “this same passion and concern coming from our own young people as evidenced in their project ideas”.

As BT marks 20 years organising the event, he added: “Our alumni are the change makers of tomorrow; and that the BTYSTE is a powerful platform for them to express their ideas, opinions and solutions.”

Minister for Education and Skills Joe McHugh underlined the exhibition’s role in developing analytical skills, critical thinking and creativity. “Every year the BTYSTE makes this happen. It is an inspiration. I was deeply impressed at last year’s event by the scale of ambition from all the students, their ability to explain their projects and the knowledge and skill that they demonstrated.”

It also gave students a chance to channel their talents into issues which they want to tackle and change, he added.

The contest is for more than 200 prizes for individuals, groups and teachers while the overall winner will represent Ireland at the EU Contest for Young Scientists in Salamanca, Spain, in September 2020. In addition to the main exhibition, the Primary Science Fair, a non-competitive exhibition for primary-level students, takes place at the same venue from January 9th to 11th.

1 California shuts down again as US coronavirus cases surge
2 US passengers fly into Dublin: ‘I’m here for six days. I guess I’ll have to stay inside’
3 Travel rules unlikely to include mandatory quarantine or cancelled flights
4 Covid-19: 200 to 250 people arriving in Ireland from US daily - Coveney
5 Maureen Dowd: Biden has his limitations but he’s no Trump
Real news has value SUBSCRIBE