Fireball sightings: We have never ‘seen a shooting star so spectacular’

Dashcam footage has captured the moment when what appears to be a flashing bright meteor or fireball streaked across the skies over Banteer, Cork. Video: Sean Linehan 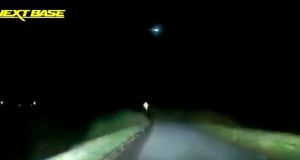 Fireballs, also known as falling or shooting stars are large meteors that shine brighter than Venus, the brightest “star-like object” that can be seen with the naked eye. Photograph: Screengrab from Sean Linehan

Two fireballs were spotted over Ireland on Monday evening, Astronomy Ireland has confirmed.

They appeared in the skies at around 6.50pm on Monday and were visible as far east as South Yorkshire, but were seen most clearly over Ireland.

Fireballs, also known as falling or shooting stars are large meteors that shine brighter than Venus, the brightest “star-like object” that can be seen with the naked eye.

Most meteors are caused by small particles of dust that were left behind by comets. It is a high-velocity body of matter from space which illuminates the sky due to friction with the atmosphere.

The brighter meteors come from larger particles. Fireballs are probably caused by objects the size of a pea and larger, according to the Astronomy Ireland website.

However, most comets leave very few large particles behind them “so most fireballs probably come from pieces of smashed off asteroids as the result of something (probably another asteroid) colliding with an asteroid, probably millions of years ago.”

Fireballs are quite rare and are rarely seen in the sky so sightings don’t happen very often.

It wasn’t a firework folks, despite the week that’s in it! 👻 🎃 They don’t make them that big yet. Sounds like a meteor or a fireball. Thanks for the reports and keep them coming.

Heather Lang and her mother, Julie, saw the fireball in Sligo, “My Mum, Julie, and I were driving outside Tubbercurry, Co. Sligo facing southeast, when we saw in the sky in front of us what looked like a very big and very close shooting star.

“It appeared like a ball of fire from our left hand side, and changed to a greenish colour as it reached our right hand side, before appearing to burn out. As it passed us by it seemed to be getting much closer to the ground.”

Reader Catherine Murray was driving from Kerry to Cork when she spotted the fireball. “We were driving towards Cork and were on the Kerry side of the county bounds around 6.50pm yesterday, when we saw what we first thought was a fire work except that it went horizontally across the sky. It was large and had a yellow head and a red and yellow tail and was spectacular.”

Driver Sean Linehan captured the “bright fireball” on a dashcam fitted to his car outside Banteer, Cork, but said the footage “doesn’t do it justice”.

Paddy Maher, from Laois, discovered he had captured the meteor on a security camera outside his house after reading about the sighting on Twitter.

“I checked back on my cam that I bought new only last week,” the 35-year-old plasterer told the PA news agency.

“I was delighted that I caught a glimpse of it - I might keep the camera on the sky in future!”

Barry Kennelly saw the fireball in Carlow, “I was coming off the M9 heading for Carlow town when a green object with a red and yellow tail streaked across the sky from the south.”

David McCarther from Co Down and his son, James, saw the bright meteor as far away as Cheshire in the UK: “My son James and I were driving south from Macclesfield, Cheshire, at exactly 6.50pm Monday evening on the road to Congleton when we both had a grandstand view of what looked like a large firework racing across the sky from east, northeast, crossing over Sheffield towards the west over mid Wales.

"We saw only one fireball, a bright green/pale blue. To us it looked like it was falling to earth possibly over Wales but in light of your report obviously was well over the Irish sea by this time ... Neither of us have seen a shooting star so spectacular. Fantastic display, all over in about two seconds.”

Did you see anything in the sky last night? Forward on any sightings, pictures, or videos to newsdesk@irishtimes.com . – Additional reporting from PA