Climate change is being talked about in pubs. Is a shift occurring? 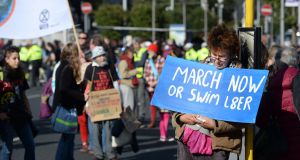 It’s not just the climate that’s changing – Saturday nights are, too. I was out for a drink last weekend at a bustling city centre spot when a troupe of Extinction Rebellion activists marched through the crowd with drums, flags and chants of “Seas are rising, so are we!”

As my friends will attest, I have a habit of delving into existential monologues on nature, science and ecological breakdown on nights out. It’s not much craic, but I can’t help it – when you work in this area, and much of your day is taken up with conversations about things going from bad to worse to terrifying, socialising tends to release the emotions that accompany the facts.

Like most people, my friends have normal jobs and they wouldn’t consider themselves to be environmentalists. If I weren’t there, I’m pretty sure feedback loops and extinction rates wouldn’t be on the evening’s conversational agenda. But as the Extinction Rebels poured through the throng in the street-side smoking area, I heard discussions popping up around me. People were talking about climate change. In the pub. And I wasn’t forcing them to. Was this a moment?

If it was, I hope there’s many more of them to come, and soon, because the latest report from the global authority on climate change science, the Intergovernmental Panel on Climate Change (IPCC), contains the kind of information that we should all be talking about. It focuses on the world’s oceans and the cryosphere, which is a catch-all term for frozen stuff: glaciers, ice sheets, ice shelves and icebergs, ice on oceans, lakes and rivers, snow cover, permafrost and seasonally frozen ground.

The findings couldn’t be gloomier: the cryosphere is melting, and will continue to do so in the coming decades, with unavoidable consequences for people. Glaciers that feed the world’s major river systems are losing mass, threatening irrigated agriculture and food security, drinking water availability, sanitation and infrastructure, especially hydropower.

Polar regions are undergoing profound changes, many of which will be irreversible for centuries, at least: Arctic sea ice is shrinking in thickness as well as extent, permafrost, which locks up vast quantities of carbon stored in soil, is getting warmer, and the wildfires we saw earlier this year in the boreal forests and tundra of the world’s northernmost regions will become more common.

The picture isn’t any better for the oceans, or for the two billion people who live in close proximity to one: sea-level rise is accelerating as ice on the Greenland and Antarctic land masses melts, and tropical cyclones are getting even windier and wetter. Extreme, once-a-century sea-level events are predicted to become the new normal, happening at a once-a-year level of frequency.

Ocean chemistry is changing, too, with continued surface acidification and oxygen loss further contributing to changes in the abundance, composition and geographical range of marine species, including the fish on which many coastal communities and indigenous peoples depend for food and income.

It’s worth reminding ourselves that these changes are happening on human timescales: if you’re 50, the oceans have warmed continuously throughout your lifetime and, if you’re 25, that warming has probably more than doubled since you took your first breath. If you’re born today and live a full life, you will experience ocean conditions that are entirely without precedent.

The solutions are simple: “urgent and ambitious emissions reductions” coupled with “co-ordinated, sustained and increasingly ambitious adaptation actions”. But as we know only too well, delivering on them is the opposite of simple, because it requires the kind of transformational recalibration of our politics, our systems of governance, our economics and our social order that a majority is unlikely to vote for – in the near future, anyway.

And the near future is the only one we’ve got to make the change. Realising this makes one of the saddest statements in the report all the more painful: the “high confidence” observation that the people with the lowest capacity to respond – the world’s poor – are often those with the highest exposure.