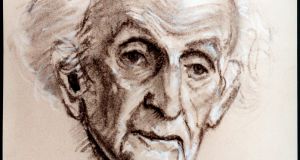 Hungarian Cornelius Lanczos took up a position at the Dublin Institute for Advanced Studies.

Lanczos was born in Hungary in 1893. In his PhD studies at the University of Szeged, he aimed to combine general relativity and electromagnetic theory. An early link with Ireland was his use in his doctoral dissertation of quaternion calculus. Quaternions had been invented by Irish mathematician William Rowan Hamilton in 1843.

Albert Einstein read and approved Lanczos’ doctoral dissertation. In 1928, Einstein offered him a one-year scholarship to work as his mathematical assistant in Berlin. In terms of joint publications, nothing emerged from this collaboration, but the two scientists remained on close terms despite differing scientific perspectives.

Lanczos emigrated to the United States in 1931, to a position at Purdue University in Indiana. In 1944, he moved to the Boeing Aircraft Company where he worked on practical design problems, and he devised several brilliant and powerful methods in numerical analysis. One of these – now called the Lanczos method – is among the most popular methods for matrix computations. It was listed among the top 10 numerical algorithms of the 20th century.

In May 1954, Lanczos moved to Dublin as senior professor at Dias, where he worked on both mathematics and physics. One of his great breakthroughs in mathematics was what is now known as singular value decomposition (SVD). He was awarded the Chauvenet Prize by the Mathematical Association of America for this work, which is today referred to as the fundamental theorem of linear algebra.

While Lanczos tackled applied mathematics problems as part of his work, his first love was physics. He strove for decades towards a unified field theory of general relativity and quantum mechanics. Lanczos began to apply the theoretical methods first developed by Hamilton to the problem of the unified field. Towards the end of his life, he published what he regarded as his greatest work in this area. It involved high frequency undulations in the metric, matter waves or “ripples on the pond” as his biographer Barbara Gellai called them.

Lanczos was a brilliant lecturer and expositor of mathematics and physics. He wrote some excellent books, several of which are still in use. One of these was his Discourse on Fourier Series. He found an efficient way to compute Fourier transforms, a method now called the fast fourier transform (FFT). The FFT has had an enormous impact on computational methods, making many difficult problems practicable.

Lanczos was very conscious of the importance of beauty and elegance in mathematical and physical theories. His main goal was a unified theory that would embrace general relativity, electrodynamics and quantum mechanics. We have still not reached this goal: the quest for a unified theory of all the forces of nature is a problem of great difficulty and the struggle to achieve this continues.