Right now, remdesivir is the most promising one in tackling the virus head-on 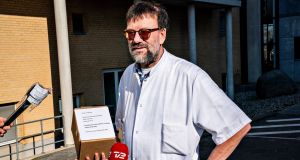 A cacophony of drug hopefuls for Covid-19 has bombarded news headlines and bounced around social media for weeks. There have been incendiary announcements about “game changers” bamboozling experts and non-experts.

It is not all noise though. There are drugs, new and old, hitting the right notes in terms of anecdotal reports and early studies – bolstered by a scientific rationale as to why they may work.

Right now, remdesivir is the most promising drug in tackling the virus head-on. This experimental drug developed by Gilead was first used on patients with Ebola virus.

“Remdesivir is a potent anti-viral agent that directly kills the virus,” says Prof Luke O’Neill, immunologist at Trinity College Dublin. It gums up a critical enzyme that the virus needs to replicate, tricking it into thinking it is a piece of viral RNA.

A US study in 2017 showed it was effective against multiple corona viruses, including the diseases SARS and MERS in lab mice. It was shown in January to be highly effective at controlling the new virus (SARS-CoV-2) in human cells. That was in a lab. There are now patient trials underway in China. Prof O’Neill predicts remdesivir will be the first drug to make a big difference in patients.

It is a broad-spectrum antiviral, which is a rarity.

“Most antiviral drugs are specific to a single type of virus,” says Dr Kim Roberts, virologist at Trinity College Dublin. “We don’t have many broad-spectrum antivirals that inhibit replication for many different types.”

Viruses have intimate relationships with ourselves, hijacking our cellular machinery to make copies of themselves. Trying to stymie the virus without hurting our own cells and triggering side effects is therefore challenging.

Remdesivir is an experimental drug, not yet approved for any disease. Scientists will be on the lookout for side effects. At the start of March, a large trial of Remdesivir began with 400 patients across 38 medical centres around the world, including in the United States, South Korea, Singapore, Denmark, Spain and Italy.

One way to avoid unanticipated side effects is to retool an old drug. Fuelled by hyperbole from US president Donald Trump, chloroquine has blazed across twitter as a cure to Covid-19. More certain is that it has been used to treat malaria for decades. It was derived from quinine, itself extracted from the bark of a South American tree in the 1820s – and was first made in the 1930s.

A study with hydroxychloroquine (a form with less severe side effects) in 24 patients in southern France found a significant reduction in the virus. Adding an antibiotic boosted the effect. There were criticisms that it was a small study, and no patients got placebo for comparison. Prof O’Neill counters that this approach can be justified with a lethal disease.

“The end point in that trial was death, and that is a pretty clear end point,” he adds. The benefit was not something difficult to quantify like pain reduction, but survival. It remains unproven for Covid-19 and larger trials are needed. One is underway in New York.

“This is your dream scenario. You repurpose an old drug,” enthuses Prof O’Neill. “Chloroquine has been used in millions of people.”

It can cause serious side effects, but these are known. Scientists have studied why it works against malaria, and there is a rationale as to why it might work against SARS-CoV-2.

The virus enters a cell wrapped within part of the cell membrane. Cocooned there, it needs acidic surroundings for an enzyme that preps it for release. “What chloroquine does is prevents acidification of the endosome, keeps it alkaline, which means it [the enzyme] does not work and cannot clip the spike protein,” O’Neill explains. The virus remains stuck and cannot replicate.

Chloroquine has been used to treat non-malaria fevers, lupus and rheumatoid arthritis. This relates to a second effect; it dampens inflammation. As does the antibiotic it was used with.

“Azithromycin does kill bacteria, but it is anti-inflammatory as well,” he notes. A successful treatment does not have to kill viruses. Tackling inflammation can save Covid-19 patients’ lives.

As we advance in years, our brake on inflammation becomes worn. This is linked to a decline in the performance of immune cells, such as the T cells that terminate infected cells. This cellular arm of the immune system helps control levels of inflammation, but it underperforms as people age. So, paradoxically, inflammation is more vigorous in older people.

“Once inflammation begins, you cannot put out the fire as you could when you were younger, which is why older people are more at risk.”

Small proteins called cytokines kindle inflammation. One of these, interleukin-6 (IL-6), stokes fever and acts as a clarion call for macrophage cells to move in and kill foreign invaders.

“The trouble is, as Covid-19 gets severe, you make far too much IL-6,” O’Neill says, “and the inflammation goes out of control.” Macrophages flood the lung tissue and ignite an inflammatory storm, inflicting injury to the lungs.

A group of drugs previously approved for other medical conditions may help out here – IL-6 blockers. One prompting a lot of excitement is tocilizumab from Roche, used to treat rheumatoid arthritis for many years. This IL-6 inhibitor is being tried out in China in Covid-19 patients to arrest their cytokine storm.

Roche is recruiting around 330 patients for a trial expected to start in April. Regeneron and Sanofi began a large trial involving 400 patients with their IL-6 blocker, sarilumab, in March, after it showed promise in China.

Yet another strategy against the virus is to use the serum from recovered patients, who harbour antibodies. Companies can also copy these antibodies [see below].

Also, under investigation, is an anti-viral combination, lopinavir/ritonavir, developed to block an enzyme in HIV. The duo was being tested in people infected with MERS coronavirus, before the Covid-19 outbreak.

Prof O’Neill describes the push towards therapies as unprecedented.

“Talk about shots on goal,” he says. “I’ve never seen anything like this. There are loads of different approaches being explored.”

Once a person has recovered from Covid-19, their blood serum retains antibodies to neutralise the virus. These antibodies known as convalescent plasma can treat people with the disease.

“Taking convalescent serum – so antibodies – from someone who has recovered from infection is a long-established treatment used for all sorts of viruses,” says virologist Dr Kim Roberts, based in Trinity College.

This approach was used on some patients in Wuhan early in the outbreak. “It can be a powerful way to treat someone who is sick, but it is incredibly difficult to scale up,” she says. A recent report in the medical journal JAMA reported that convalescent plasma improved the condition of five patients.

Neutralising antibodies bind to the virus and stop it entering cells. Researchers globally are seeking such antibodies from Covid-19 patients. Companies then hope to manufacture synthetic versions at scale. Regeneron is a US biotech with a large production facility in Limerick that has isolated hundreds of antibodies against the Covid-19 virus and is developing an antibody cocktail that could be available by the end of the summer.

“Antibodies are powerful, and this virus can be neutralised by antibodies,” says immunologist Prof Luke O’Neill. “There is optimism there. It is much quicker than making a vaccine.”