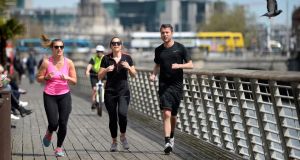 The body must work to maintain the multitasking brain we developed over long evolutionary time and if the brain is not actively exercised on an ongoing basis its capacity tends to decline. Photograph: Dara Mac Dónaill

Probably the single most effective thing you can do to improve your general health is to take plenty of aerobic exercise. It is well established that exercise improves heart function, helps to protect us against a wide variety of diseases and improves our mental health.

And recent research, described by David Raichlen and Gene Alexander in Scientific American (January 2020), shows aerobic exercise also improves cognitive function, slows down age-related cognitive decline and may prove to be a powerful therapy to slow down the accelerated cognitive decline seen in Alzheimer’s disease.

It was long thought that new nerve cells (neurons) cannot arise in the mature brain, but Raichlen and Alexander describe research carried out in the 1990s demonstrating that aerobic exercise stimulates the birth of new neurons in the brain hippocampal region in mice – the hippocampus is associated primarily with memory. This process is associated with the production of a protein called brain-derived neurotrophic factor (BDNF) that promotes growth/survival of nascent neurons.

Aerobic exercise also improves other parts of the brain; for example, the pre-frontal cortex which is associated with executive cognitive functions such as planning and multitasking. This improvement may reflect greater inter-connectivity between neurons.

It is generally accepted that atrophy of the hippocampus is linked to memory difficulties during normal human ageing and this occurs to a greater extent in people with neurodegenerative diseases such as Alzheimer’s. Executive cognitive function also tends to decline during normal ageing and is accelerated when neurodegenerative disease is present.

The authors propose a fascinating hypothesis to explain why aerobic exercise improves human brain cognitive function. The evolutionary line leading to human beings diverged from the line that led to our closest relatives (bonobos and chimpanzees) 6 to 7 million years ago. Since that divergence our human ancestors changed in two ways that forged a link between cognitive ability and aerobic exercise: bipedalism and hunter-gatherer foraging.

Walking on two legs is a much less stable arrangement than moving on four legs. Bipedalism means supporting oneself for a considerable fraction of the time on one leg which calls for considerable co-ordinated muscle engagement to maintain balance. At the same time one must scan the environment in order to avoid obstacles. All of this activity must be co-ordinated by the brain and provides a much greater cognitive challenge than experienced by our four-legged cousins.

Our earliest human ancestors lived fairly sedentary plant-eating lives, similar to our ape cousins. But about 2 million years ago, as climate-change cooled and dried habitats, our ancestors took up a hunter-gatherer lifestyle, foraging for plant foods and hunting animals for meat.

A hunter-gatherer lifestyle calls for lots of aerobic exercise, co-ordinated social interaction and mental mapping of the environment, all conducted while moving briskly on treks of up to 20km. All of this activity encouraged the evolutionary development of hippocampal, prefrontal cortex and other brain areas.

The body must work to maintain the multitasking brain we developed over long evolutionary time and if the brain is not actively exercised on an ongoing basis its capacity tends to decline.

Today we don’t need to work hard hunting and foraging to find food and the cognitive decline that normally occurs during ageing is very probably related to our sedentary lifestyle. Continuous aerobic exercise throughout our lives is the antidote to this gradual decline in cognitive capacity.

How much aerobic exercise do we need?

The US department of health and human services advises that we should exercise aerobically at moderate intensity for at least 150 minutes a week or 75 minutes a week at vigorous intensity.

Raichlen and Alexander further propose that we could get even more benefit from aerobic exercise if we combine it with some cognitive challenge. For example, one study showed that regular cross-country running produces more cognitive improvement than running on a treadmill.

So get out there and get aerobically active. Your brain will thank you.