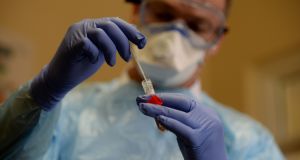 Coronavirus testing: the goal is to increase capacity to 15,000 per day. On Sunday, the HSE said capacity was about 5,000 per day. Photograph: Alan Betson

The Health Service Executive could not run a full Covid-19 testing programme for the second day in a row on Monday due to equipment shortages, it has emerged.

Several centres were closed initially on Sunday, including the largest in the State, at Páirc Uí Chaoimh in Cork.

A spokeswoman for the HSE confirmed that it is “replenishing stocks and while not all centres will have sufficient supplies to recommence testing today [Monday], we hope to be fully operational across all sites tomorrow.”

The HSE did not respond to a query about which testing centres were affected.

The health service indicated that shortages of supplies for testing laboratories, which run the analysis on the samples collected at the centres around the country, are also becoming a major issue.

“We have also had challenges in terms of supplies of reagent for testing laboratories. This is a global challenge with major suppliers having to ration provision across the world. We are making every effort to procure new stocks.

“However provision of reagent and extraction kits will remain a major challenge for the foreseeable future until the major suppliers ramp up production,” the spokeswoman said.

Since community testing started on March 16th, some 38,000 people had been offered testing dates in the sampling centres. Tests were originally only analysed at the National Virus Reference Laboratory (NVRL), but since then, 12 hospital labs have been brought onstream, as well as a HSE lab and another in the Department of Agriculture.

“Discussions are ongoing with other laboratories to increase capacity,” the spokeswoman said. Since last week, priority for testing has been given to those displaying two symptoms of Covid-19, who are also in one of several vulnerable groups. Testing of healthcare workers and patients in acute hospitals is largely being carried out in hospitals’ own labs, whereas community tests are being sent to the NVRL.