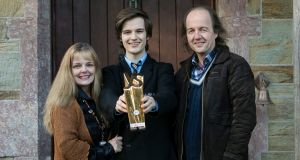 He devised an advanced computer programme using artificial intelligence to detect “deepfake” videos, which have caused havoc on social media channels. It is quicker and more accurate than many of the state-of-the-art detection systems, the judges found.

As technological tools have advanced, so too has the spread of misinformation. The societal impact is widespread, from bullying in a small social network to influencing democratic elections. A particularly sinister form of misinformation is when a synthetic image or video is created by replacing a face with the likeness of another, known as deepfake.

This often takes the form of superimposing the face of a celebrity in an explicit image or video. The technology is now so advanced that it can be difficult for the human eye to tell whether the video is fake.

It is the fifth time that the Cork student entered the BTYSTE, and continues a remarkable trend where so many overall winners have come from that county – and his win adds to a series of outstanding winners in technology and IT who have undertaken ground-breaking research of global significance.

These include Patrick Collison of Stripe (winner in 2005); Shane Curran, founder of Evervault data privacy company (2017) and Sarah Flannery (1999) who discovered a new way to encrypt data.

This year’s competition was staged virtually due to Covid-19 restrictions.