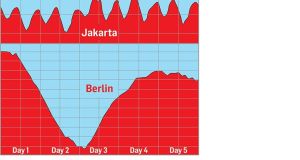 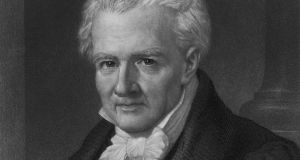 The German naturalist Alexander von Humboldt noticed that, in the tropics, the oscillations of pressure were so regular that he could regard the barometer as a sort of clock. Photograph: Hulton Archive/Getty Images

Anyone who lives by the sea is familiar with the regular ebb and flow of the tides. But we all live at the bottom of an ocean of air. The atmosphere, like the ocean, is a fluid envelop surrounding the Earth, and is subject to the influence of the sun and moon. While sea tides have been known for more than 2,000 years, the discovery of tides in the atmosphere had to await the invention of the barometer.

Atmospheric pressure rises and falls over periods of days, as weather systems develop, move and decay. These changes do not have a simple periodic variation but are quite irregular. It is the job of the weather forecaster, using computer models for guidance, to predict these so-called synoptic pressure changes and the associated weather conditions. Pressure changes during stormy periods can be large.

When the atmosphere is in a more benign state, as in an anticyclonic regime, small periodic variations of pressure, normally masked by the synoptic weather changes, can be observed. These are regular, semi-diurnal oscillations with periods of 12 hours, having two maxima and two minima each day. This is reminiscent of the tidal variations in the ocean.

The ocean tides are forced by the gravitational attraction of the sun and moon. Since we are much closer to the moon, the strength of its attraction varies more strongly from place to place, so the tides are dominated by lunar forcing, with the sun having a modifying effect. The basic period of the tides is locked in to the moon, so that low and high water occur about one hour later each day, following a lunar cycle.

While the oceans are bound within basins, the atmosphere is free to move across continents, so the air tides are global in extent. They are not due to gravity but to heating, through absorption of sunlight by ozone and water vapour. Since the thermal forcing results from the daily variations in sunshine, the air tides are synchronised with local solar time, not lunar time. Observations confirm that the pressure reaches a maximum at about 10am and 10pm, and a minimum at 4am and 4pm local time.

Tides in the atmosphere are strongest near the equator and are less prominent at higher latitudes. The illustration shows pressure variations over a five-day period at two locations, one in middle latitudes (Berlin) and one near the equator (Jakarta). The graph for Berlin is dominated by large synoptic variations, and the small tidal signal is completely swamped by these. For Jakarta, where the synoptic variations are small, the twice-daily tidal variation of pressure is very evident.

Around 1800, the great German naturalist and traveller Alexander von Humboldt led an expedition to South America. He made many scientific measurements including regular barometric readings. He soon noticed that, in the tropics, the oscillations of pressure were so regular that he could regard the barometer as a sort of clock.

Humboldt was also aware of earlier measurements by Robert de Lamanon who, in 1785, observed the pressure hourly for several days while crossing the equator and who noticed the twice-daily variations. Lamanon sent an account back to the Académie Royale in Paris, but he himself never returned, being one of a party of men massacred shortly afterwards by the natives of Samoa.

Peter Lynch is emeritus professor at UCD School of Mathematics and Statistics. He blogs at thatsmaths.com