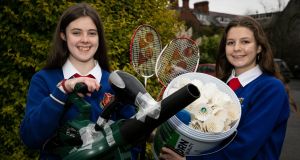 Alannah Voigt and Sarah Carey of St Vincent’s secondary school in Dundalk, Co Louth. Their project is “An investigation into the effects of combined heated air currents of different temperature on the flight dynamics of a badminton shuttlecock”

The growing social impact of “deepfake” digital content prompted a Co Cork student to use artificial intelligence (AI) to devise a detection system which he believes is more accurate and quicker than those in common usage.

The system, which uses advanced machine learning techniques, was devised by Greg Tarr of Bandon Grammar School, and is entered in the technology category in this year’s virtual BT Young Scientist & Technology Exhibition.

Deepfakes refer to manipulated videos or other digital representations produced by sophisticated AI, yielding fabricated images and sounds that appear to be real and are frequently very convincing.

However, deepfakes have become such a big problem that large tech companies came together in 2020 to offer a $1 million prize in an effort to improve their detection. Thousands entered.

Greg analysed the top five entries, and concluded while they were effective they were so computational expensive it would be impractical to deploy them at the scale required. He attempted to solve the problem by using AI to run images in batches and deploy hardware more efficiently.

Using “ensemble” software to improve the classification of deepfakes, he went on to devise “a novel, high-speed face detector...with pretty good results”. These, he claimed, were just as accurate as current state-of-the-art systems but quicker. In addition, his system could be used at a tenth of the cost.

“Incidentally, my system correctly identified the Channel 4 deepfake of the queen with a 94.3 per cent confidence,” he added.

Developing technology to ensure a safer world was the motivation of Jake Casserly of St Patrick’s Classical School in Navan, Co Meath, who developed Telepath, a mobile application designed to reduce road collisions on rural roads, particularly those with dangerous bends.

It uses GPS technology to locate a road-user in a particular area, and then measures distance to the nearest vehicle coming in the opposite direction. If it’s a large vehicle, such as a tractor, an alert is issued. The Telepath can measure speed, “and even those who are exceeding the speed limit, and ring 112 in the event of a collision”, he said.

Using the application could lead to cheaper car insurance in the future, he said – and potentially, be used as a pedestrian alert system.

Transition-year students Ria O’Grady, Sarah Ryan and Caitlin Byrnes also deployed GPS technology in evaluating the extent of light pollution across a large area of south Tipperary, with results showing the extent of its damaging impact in urban areas.

They took a wide range of light readings using metering technology on the grounds of St Anne’s secondary school in Tipperary, and at a rural location at the foot of the Galtee mountains. They looked at the impact of lunar orbits; seasons, cloud cover and local weather conditions, and used GPS to contrast light pollution between major towns in the region.

While they expected to find significant pollution, mainly due to excessive or inappropriately directed light, in towns, they were surprised by the extent to which the night sky was affected in more remote locations, Caitlin said.

While they were concerned about the impact on humans, the impact on natural habitats, especially plants and animals, was a big issue, she added.

Using a large amount of official Covid-19 data and applying what is known as “SIR modelling”, they generated three new mathematical formulas to predict the reproduction number – a way of rating coronavirus or any disease’s ability to spread.

They applied them to different population groups; susceptible people, those infected and those who are recovered or died.

Their modelling was used to predict trends up to March and is already proven to have a high degree of accuracy, said Kapish.

Judging in this year’s contest will be completed on Thursday, with the winners due to be announced at lunchtime on Friday.