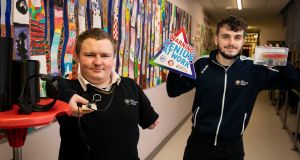 Over 1,000 students from across Ireland are taking part in the first ever virtual BT Young Scientist & Technology Exhibition. Participating students from Naas Community College, Naas, Co Kildare Sean Byrne and Sean Higgins and their project ‘Can an economically efficient upper limb prosthetic be made and match the market?’. 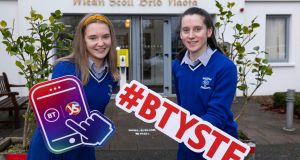 Subjecting crops grown in Ireland to a form of high volume water stress at an early stage of growth may be a way of making them more resilient in the face of increased global warming.

That is the firm conclusion of Luke Fox-Whelan, a pupil at Templeogue College, Dublin, who grew winter barley with a view to making it more robust – given that 14 per cent more rainfall is predicted for the country in coming years and concentrated, most of which will occur at wintertime.

His research, which he is featuring at this year’s BT Young Scientist & Technology Exhibition, is not a simple experiment on water tolerance. He believes the plant’s “somatic memory” kicks in when it is subjected to an early three-day “storm stress test”.

So that when it encounters the real thing during a wet spell during winter, it is better able to withstand the conditions.

The science behind this, he believes, relates to epigenetics; a second layer of genetics which is an emerging science and the subject of intense investigation in recent years. It can give rise to a particular trait based on a previous memory, Luke explained.

Plants subjected to the initial stress went on to be less fragile, instead of the untreated group which were more inclined to fall over and die.

While he accepts more experiments are needed on the technique, “it’s a way of addressing food insecurity due to climate change”.

He confirmed his motivation was, “how do we make climate change less world-ending?”

There is always a place for fascinating basic science at the BTYSTE, such an investigation of why a badminton shuttlecock flies faster and further in warmer temperatures or why scrolling through TikTok is so addictive. But the scale of projects and endeavour focussed on countering climate change and on reducing the carbon footprint related to human activity stood out.

Orlaith Ní Ghallchobhair of St Kevin’s Community College in Dunlavin in Co Wicklow, has proposed nettles as a sustainable solution to fast fashion.

In particular, she demonstrated how nettle wool and nettle fibre can be used as a biodegradable alternative to polyester. Her research was prompted by the realisaton “most of my wardrobe is made from synthetic fibres”, which are recyclable up to a point but don’t breakdown for up to 200 years.

Orlaith extracted nettle fibres from nettle stalks and spun them into a yarn. She also subjected it to “tensile strength tests” and evaluated its ability to absorb water. The first product she produced was a nettle wool scarf, and went on to recycle a cotton shirt insulated with nettle wool.

She was delighted to prove the sustainability of nettle wool in a fashion world increasingly seeking to reduce its carbon footprint, safe in the knowledge when finished with the garments, she can put them in her garden composter.

John David O’Donnell, a first year student at Patrician Presentation School in Fethard, Co Tipperary, investigated the possibility that sheep’s wool be used as an alternative to plastic packing, thus “reducing the environmental impact of plastic waste and reviving the wool industry”.

Living on a sheep farm, he said he was conscious of how most wool was being exported to China, and Covid-19 had, in effect, collapsed the domestic market, and believed the natural fibres in wool could be combined with other biodegrable materials to replace plastic, which is a source of so much pollution – and carbon emissions.

He experimented on combinations of wool with gelatin, starch, gum Arabic and flour, and concluded it could result in a viable alternative.