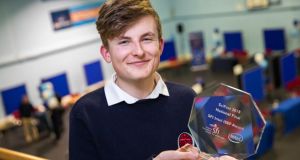 Large-scale quantum computers are set to be the next frontier in advanced computing but they are not yet widely available, which means there is a requirement algorithms that can carry out fast, accurate simulations.

Adam Kelly developed what is known as “an open source solution” to quantum computing which was up to 15 times faster than conventional simulators. It is available for anyone to use in their own experiments with ease, he explained. This software “has direct applications in the verification of quantum devices, quantum algorithm design and investigations of quantum supremacy”.

He developed a prototype two years ago and has worked on it every day for the past nine months. The work is a combination of physics, computing and maths, he added – and the good news was “others say it works”. He will represent Ireland at the Intel International Science and Engineering Fair (ISEF) in Phoenix, Arizona next year.

More than 10,000 secondary school students participated in this year’s SciFest, which is an all-island contest fostering interest in STEM (science, technology, engineering and maths). Following 16 regional finals, 64 students went on to exhibit 37 projects at the national final in the Marino Institute of Education in Dublin on Friday.

Leo Camacho, a third year student from St Eunan’s College, Letterkenny, won the SciFest Scientist of the Future Award for his project on making social media a better place using artificial intelligence. He developed a digital robot that can “indicate if a tweet is bullying or not”. It examined the linguistic structure of 25,000 tweets and identified negative messages, such as racism or death threats. He hopes to extend its use to other social media platforms.

Margie McCarthy of the Science Foundation Ireland (SFI) Innovation and Education Directorate, said SciFest was a fantastic opportunity to introduce STEM to young people. The event, which is supported by SFI, had demonstrated it was for everyone and “Ireland has a fantastic future in this sector”.

Minister for Communications, Climate Action and Environment Richard Bruton, who attended the final, said he was impressed the dedication, innovativeness and creativity shown in this year’s projects. “Competitions such as Scifest are so important. They spark curiosity in our young people and awaken a passion for the STEM subjects by showing their application in the real world,” he added.

SciFest founder and chief executive Sheila Porter said the initiative gave students of all abilities and backgrounds the opportunity to develop their research, problem solving; critical thinking and presentation skills. “We take pride in creating the biggest, most inclusive student science event possible.”

Odhran Brady of Salesian College, Celbridge, won the Berlin Long Night of Science Award for his project on quantifying whiplash.

Emma Kelly and Brian Conlon of Moate Community School in Co Westmeath won the Abbott Ireland Life Sciences Award for their study of the ecological impact of Irish gorse fires.

Tony O’Halloran and Aidan Mamo Cooney won the Technological Higher Education Association Award for their project; “the applications of queuing theory to the child and adolescent mental health services in Ireland”.

Conn Caomhánach and Con Ó Meachair of Meánscoil Gharman in Enniscorthy won the Irish Science Teachers Association Award for their investigation of the biological benefits of probiotics in agriculture.

This year’s SciFest saw the introduction of the Broadcom Masters Award for junior cycle students, ranging in age from 12 to 14. The inaugural award was won by Éabha Kenny of Scoil Muire gan Smál, Convent of Mercy, Roscommon, who will participate in the Broadcom MASTERS science programme and also attend the Intel ISEF next year.