Getting to the heart of research on medicines, body clocks and ageing 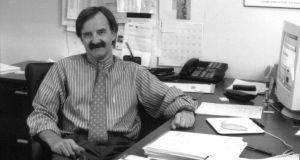 Dr Garret A Fitzgerald: “Now that the Dublin skyline is crowded with cranes again, I’d love to see an initiative to foster and support the hard sciences.”

Garret, you have won lots of awards for your work as a physician and scientist, and you will soon be inducted into the Italian and German academies of sciences respectively, congratulations.

Celebratory science is basically unfair. Claude Bernard, the great French scientist, said ‘Art is I, science is we’. Although prizes are given to individuals, they are just figureheads of a group effort and in my case, that’s certainly true. I’ve worked with many great scientists, quite a few of them from Ireland, and anything I’m given credit for reflects our collective effort.

Through your work at University College Dublin and at the University of Pennsylvania, you have improved stroke treatment, made anti-inflammatories safer for the cardiovascular system and discovered that the heart has its own internal clock. What is your proudest moment or outcome from your research?

I’m not sure I have ever felt proud. Excited, relieved, disappointed, stunned and surprised are the more common reactions in science to your findings, or indeed to those of others. I’ve had lots of all of those.

The confluence of these emotions is what makes science such a great career choice. Every day is different and you have to work hard, focus and persist. It’s important not to get distracted by success or failure – there will be plenty of both. But if you are lucky, you might participate in something that makes a real difference.

What are you working on in the lab now?

The game in pharmacology has changed – there is less interest in large average effects, detectable by large randomised trials. Rather, we want to know why people respond to the same drug differently and develop ways to predict drug efficacy and safety.

In the case of drugs like Celebrex, the risk of a heart attack is maybe 1 to 2 per cent, but it would certainly help to know who is most at risk and most likely to benefit. We are looking at lots of factors that condition that – time of dosing, the microbiome, genetics, epigenetics, for example.

On the clock side, I recently did a sabbatical in Calico, an Alphabet company interested in the biology of ageing. As we age, our clocks run down, and that in turn accelerates ageing. I am very interested in this aspect of biology and look forward to many collaborative projects with the folks there in this area.

You have been vocal about the need to support fundamental research – what trends are you seeing there?

If you don’t support basic science there is nothing to translate into clinical breakthroughs. We have so many examples of basic projects that at first have no obvious connection to the clinic, later surprising us. A recent obvious example is gene editing.

I thought it was a real shame that Science Foundation Ireland turned away from supporting basic research after the crash and instead emphasised what might be readily applied. This might, just might, work in the short term but it’s like eating your seed corn. Still, I recognise that there is a bit of the ‘hurler on the ditch’ in this commentary. Perhaps this was a necessary strategy to preserve research funding of any sort at the time. Who am I to judge?

However, now that the Dublin skyline is crowded with cranes again, I’d love to see an initiative to foster and support the hard sciences. We do have some really accomplished physicists, chemists and mathematicians. We should support them and foster their interaction with advances in computing, informatics and engineering. All of this is changing the shape of biomedical research and clinical medicine.

What do you do to take a break?

I’m a great believer in exercise. It’s the best anti-ageing pill. I like to run, walk, bike and ski – and maybe I’ll start to swim.

I was really fortunate to be educated in the Irish system – six years of Latin and Greek, romance languages, English and Irish as well as maths and physics up to the Leaving Cert. That grounding in the classics gives such breadth and pleasure to my life. I love to read, I’m a political junkie, I love all forms of music and opera and I feel that the classics have influenced my approach to science in so many positive ways.

Is there anything you wish you had known or appreciated at the start of your research career?

I was married to a remarkable woman and together we had three children – they are funny, caring, ethical and accomplished people. They are also wonderful parents and a great credit to Kate. I could not have accomplished anything without her and I wish I had shared that load more evenly. So, although older scientists can sometimes be a bit disparaging about the obsession with work-life balance by their younger colleagues, I think this is a very positive development.”