Next big debate in Ireland will be about assisted suicide

Do you agree that all lucid adults should have the legal right to end their own lives? 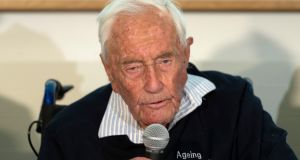 The scientist David Goodall (104) at a press conference a day before his assisted suicide in Switzerland, last month. Photograph: Georgios Kefalas/Keystone via AP

Dr David Goodall, aged 104 and probably the oldest working scientist in the world, smiles from a photograph taken at a press conference he gave in Basel, Switzerland, on May 9th this year. He declared: “Everyone over middle age should have the right unquestioned to end their lives as and when they choose.” Dr Goodall killed himself the following day in an act of “rational suicide” by turning a wheel, thereby administering a lethal injection into his arm at a clinic in Basel. He listened to Beethoven’s Ode to Joy as he died.

Goodall was a member of end-of-life advocacy group Exit International, founded in 1997 by Dr Philip Nitschke. Exit International believes every adult of sound mind has a civil right to determine the time and manner of their death. Rational suicide is defined as suicide by someone who reasonably decides their future quality of life would be unacceptable.

Originally from England, he was a botanist and ecologist who worked in Australia. He retired from lecturing in 1979 but continued his research and also edited a 30-volume series, Ecosystems of the World.

Goodall was frail and confined to a wheelchair. He had poor sight and hearing, but he was lucid, in no pain and not terminally ill when he took his life. He was simply tired of living, and, according to Nitschke, he had unsuccessfully attempted suicide within the past year. At his press conference Goodall said: “My ability and eyesight are declining and I no longer want to live this way… I’d like to be remembered as an instrument for freeing the elderly to choose their own deaths… Up to the age of 90 I was enjoying life but not now. It has passed me by, and I have done the best I can with it.”

Assisted suicide is legal in several countries such as Canada, Belgium, Holland and in a number of US states, but only for people with incurable illness. However, in Switzerland the option of assisted suicide is not restricted to those with terminal illness. It is also available to those with unrelenting pain, including suffering that can come with ageing. Goodall was neither terminally ill nor in significant pain when he killed himself. And while I can imagine how one might grow tired of life, is this not an impulse to be resisted rather than indulged?

Goodall said he wanted “no funeral, no remembrance ceremony or services”. A press release by Nitschke said this was because “David has no belief in the afterlife”. This is a strange statement. We all have ties to those around us and one main reason for a funeral is to allow family, friends and others to grieve and find comfort. One would expect that Nitschke and Exit International, who ponder the matter of death so much, would understand this elementary fact.

I believe it contradicts the intrinsic moral value of human life

The next big debate in Ireland will probably be about whether assisted suicide should be legally available to incurably ill patients who are suffering great distress, a proposal I would not favour because I believe it contradicts the intrinsic moral value of human life. But I acknowledge that assisted suicide in certain circumstances for the incurably ill is a difficult ethical question.

Christian teaching rules out suicide and hospice clinicians assure us there is no pain that cannot be managed. But many questions arise. What about people whose personal ethics allow suicide? And, what is so different, for example, between refusing to continue with medication such as chemotherapy when the prognosis is grim and making a clear-headed decision to take a medication to allow one to slip away peacefully rather than lingering on in misery for another short while?

But I strongly disagree with the idea that all lucid adults, healthy as well as ill, should have the legal right to end their own lives. Assenting to this would normalise suicide and euthanasia in society. We currently acknowledge that every human life is of incalculable value but, if suicide and euthanasia were normalised, human life would quickly come to be evaluated on utilitarian grounds. We must be careful not to foolishly wish for unlimited human freedom to choose – we wouldn’t like it if we got it.