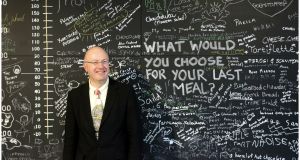 Uncertainty in the UK and US scientific communities because of combined effects of Brexit and Donald Trump’s controversial policies could provide Ireland with a competitive advantage, according to the director general of Science Foundation Ireland (SFI).

Prof Mark Ferguson said that while there were anxieties at a country level about Brexit, at the level of scientific research there were more opportunities than downsides.

“In the context of Brexit, our deep and significant existing engagement with UK research funders... remain extremely positive and will strengthen going forward.”

Already, he said there was a huge fall off in international students in the UK due to a perception it was not as welcoming as before, and a 30 per cent increase of applications in Ireland.

SFI was planning to support joint-professorships for outstanding researchers to be appointed between Irish and leading UK universities, he said.

Prof Ferguson said Ireland needed to address issues around falling university rankings and under investment in science and higher education. However, part of that had to be “telling the world how good we are” as rankings were largely determined by “reputational” factors.

“We need to talk up our game. We probably have to be more ambitious about recruiting overseas students and overseas faculty. There’s never been a better opportunity.

Hundreds of researchers have left the US Environmental Protection Agency since Mr Trump curtailed that agency’s role in tackling pollution, and US scientists have warned of a wider exodus of talent due to the changed policy environment.

Prof Ferguson said Ireland was improving its scientific research, innovation and technology but in lots of other places throughout the world countries were improving at a faster pace,

The growth of international competition on this front was the highest placed item on his “worry list”, Prof Ferguson added, at a briefing on the SFI annual report for 2017.

After the Brexit vote, Ireland’s nearest neighbour the UK had invested an additional €2 billion in science, while budgets had gone up substantially in many other EU countries, China and the US, he said.

“The war for talent and competition and innovation and unicorn companies that are going to be born and grow up to be very innovative is intense,” he added.

The good news was, based on investment, Ireland was “the most efficient R&D country in Europe” so putting more money into science would bring a disproportionate benefit for the country, he said.

Tax was “not going to cut it” in attracting foreign direct investment in the future as it was going to be at the same level around the world, he believed.

It is “supporting 31,237 highly skilled jobs, directly and indirectly, across the country”. It is establishing five new SFI research centres, which are made up of leading international researchers and top expertise from Irish universities, bringing their total to 17.

This year is also seeing the establishment of its centre for research training following a competitive process to train over 600 future PhD students in data analytics, artificial intelligence and machine learning.

The SFI report says Ireland is ranked in 11th place in global scientific rankings (based on research citations) for overall quality of scientific research and in the top five in subjects such as “animal-dairy”; immunology and nanotechnology.

Prof Ferguson, who is also chief scientific adviser to the Government, said he was delighted to see 4,894 publications being reported by SFI-funded researchers in 2017; a 17 per cent increase.

“SFI-funded publications are now 2.7 times more likely to be ‘star publications’, that is, in the top 1 per cent most-cited papers in the world, which illustrates the effectiveness of our competitive peer review processes.”