Searching for planets beyond our solar system

The discovery of extra-terrestrial intelligence would be truly transcending 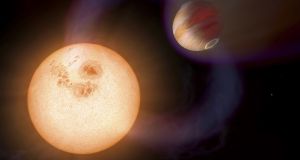 The first exoplanet transit was detected in 1999 and within 10 years more than 100 exoplanets had been detected. Photograph: Stocktrek RF/Getty

Planets beyond our solar system are called exoplanets and two of the most fascinating questions in science are firstly, how common are Earth-like exoplanets? And, secondly, has life arisen elsewhere in the universe apart from Earth?

Promising approaches to answering the latter question are in operation and it seems that a qualified answer to the former is, “not too uncommon”.

Two new telescopes, one a Nasa project and the other a European Space Agency (ESA) project, will help to answer these questions. The Nasa mission, called the Transiting Exoplanet Survey Satellite (TESS) was launched last April and the ESA mission, called the Characterising Exoplanet Satellite (CHEOPS), will be launched later this year. The hunt for exoplanets is described by Joshua Winn in the Scientific American edition of March 2018.

The transit method is the commonest way of detecting exoplanets orbiting stars light years away from Earth. Basically, the astronomer monitors a star looking for periodic tiny drops in brightness signalling an orbiting exoplanet passing across the field of view and blocking out a small fraction of the star’s light. A less common way is by observing the Doppler effect on light emitted by a star under the gravitational pull of its orbiting exoplanet.

The first exoplanet transit was detected in 1999 and within 10 years more than 100 exoplanets had been detected. But most of what we know about exoplanets has come from Nasa’s Kepler mission launched in 2009. This mission will end soon and the hunt for exoplanets will be taken up by TESS and CHEOPS. Only space-based telescopes can measure the tiny dimming effect of a transiting exoplanet. The Earth’s atmosphere would scramble this tiny signal for an Earth-based telescope. Astronomers have now detected almost 4,000 exoplanets.

Most stars discovered by Kepler with orbiting planets have only one known planet, but some hundreds of such stars have several planets. Most of the exoplanets fall into two categories, roughly Earth-sized planets and those slightly smaller than the planet Neptune.

How common are Earth-like exoplanets? Earth-like means a rocky planet of similar size to Earth orbiting its star at a distance where the temperature is sufficient to melt ice but not to vaporise the liquid water, so the planet can be reasonably expected to harbour large bodies of liquid water – the “habitable zone”. It is believed that liquid water was essential to get life started on Earth. Kepler has found about 12 potentially rocky exoplanets orbiting their stars in the habitable zone.

We don’t know yet whether any exoplanets harbour life. One approach to answering this question is to examine exoplanets’ atmospheres for tell-tale signs that the planet bears life. For example, if the planet harbours life built on the same principles as Earth-based life, its atmosphere will contain oxygen. Earth’s atmosphere is rich in oxygen, but if all life on Earth died, this atmospheric oxygen would quickly be scavenged from the atmosphere, converted into oxides and buried in rocks.

There is already a well-established programme to search for extra-terrestrial intelligence (SETI) by scanning the heavens with Earth-based radio-telescopes hoping to detect radio-frequency broadcasts from extra-terrestrial civilisations.

5 Coombe should not have given Covid vaccines to family of staff, Donohoe says

Man (28) admits murdering 11-year-old in 2019 12:48
Issues of fairness raised in way vaccine distributed to healthcare workers, HSE says 12:48
Temporary system to process 4,000 Irish citizenship applications 12:33
Coombe should not have given Covid vaccines to family of staff, Donohoe says 11:57
Vaccine should not be given to people close to death, says HSE 11:27