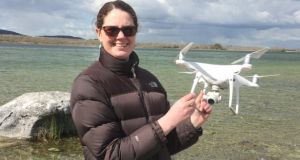 Dr Heather Lally of GMIT with a drone

Unmanned aircraft or drones are to be used to test water quality in western lakes.

Scientists at Galway-Mayo Institute of Technology (GMIT) believe drones may extend the range and quality of testing while reducing labour costs and avoiding safety issues on more exposed and inaccessible waterways.

Principal investigator Dr Heather Lally of GMIT says that application of drone technology to monitor the environment has “really taken off” over the last few years in other countries.

They are already proving useful for emergency response and searches

The GMIT Marine and Freshwater Research Centre has secured €132,000 in funding from the Environmental Protection Agency (EPA) for the project as part of its lake-monitoring programme.

Ireland is obliged to monitor the health of its inland waterways under the EU Water Framework Directive.

Dr Rick Officer, GMIT vice president for research and innovation, said the centre had already begun using drones for environmental monitoring but that this would be the first research of its type on water quality sampling.

The GMIT researchers will be assisted by industry partners Model Heli Services (MHS), a family run enterprise based in Ennis, Co Clare, and Prof Olaf Jensen of Rutgers University in New York State. He uses drones to monitor river and lake habitats in North America and Mongolia.

The project will involve installing separate communication technologies on drones, with transmission of “real-time underwater camera images and data” to flight operators.

Use of drones in Ireland is licensed and regulated by the Irish Aviation Authority, and registration with it is mandatory for all drones over 1kg in weight.

GMIT said all members of its research team have successfully completed drone flight school training; industry partners MHS are fully licensed to operate drones up to 25kg in mass.