Hotel death unrelated to Covid-19 but woman later found to have had virus, statement says 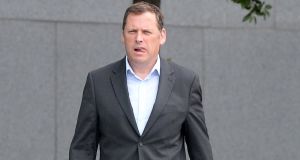 Laois-Offaly Fianna Fáil TD Barry Cowen said he was confident the authorities had the situation in Tullamore in hand. Photograph: Dara Mac Dónaill

A group of golfers who travelled to Tullamore in Co Offaly and discovered 20 members had Covid-19 has said all adhered to public health guidelines during the trip.

In a statement on Friday, the Entertainers Golf Society said members discovered they were carrying the virus after one of their companions died in the hotel of an unrelated illness but was found to have also had coronavirus. All were subsequently tested for the disease.

The group, believed to have come from Dublin, have travelled to Tullamore to play golf every year for the last 16 years.

A HSE circular to midlands GPs outlined their movements between September 6th and 10th in the event of further infections. They had visited local pubs, a restaurant and two golf courses.

In a statement issued to RTÉ’s Liveline, the society said members had travelled separately, maintained social distancing and followed all guidance set out by the places they visited.

“Unfortunately and tragically, one of our beloved friends died suddenly and unexpectedly at the hotel,” it said.

“A subsequent medical examination discovered that our dear friend had Covid but this was unrelated to her death. When we were informed we all immediately self-isolated and gave full information to the HSE about where we had visited.”

The incident led to the temporary closure of the Bridge House Hotel in Tullamore where the golfers had been staying, and the testing and screening of up to 100 staff members.

Attention has turned to the potential for contagion in the locality.

“It’s not really high down here. It was high in Offaly [in August] because of a couple of meat plants but that was confined.”

Dr Haverty said there had been no noticeable jump in calls to GP surgeries on Friday after news of the golf trip emerged, outside of already high volumes. There are about five practices in the town, with between 10 and 15 GPs.

“We will get this weekend out of the way and we will know a lot. It might have a very minimal impact. It will probably be a good test of how well all these places are doing hand hygiene.”

The owner of one local business visited by some of the party said he was informed last week that two of eight of them had tested positive for the virus.

Speaking on condition of anonymity, he said the situation had been stressful and had left him wanting further information form health officials. He subsequently got tested himself and was negative.

“Of course it does [frustrate us]. Offaly got locked down very quickly when we had a few cases and nobody wants to lock down anything,” he said. “None of us wants to close businesses. It’s been a hard six months in this country for everyone and it’s going to be another hard six months.”

Local Fianna Fail TD Barry Cowen said he had spoken to the HSE and was confident the authorities had the situation in hand.

“It’s not easy. It’s a bit of a setback and a worry,” he said. “Not that you can’t ever say you won’t get outbreaks here and there. I would rather people be more conscious of their responsibilities and not take these risks.”

1 Woman stranded in Ireland due to pandemic has ‘miracle baby’
2 Covid-19: Critical cases from NI could put pressure on services in Republic
3 Wet pubs and schools reopening led to rise in Covid cases, says Mayo GP
4 Covid-19: Public urged to ‘stay at home’ as 1,025 further cases confirmed in State
5 Gardaí say 52 people who went missing in 2020 not yet found
Real news has value SUBSCRIBE