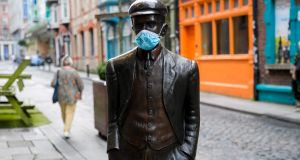 Large parts of south Dublin have lower incidence than many areas not affected by the new restrictions. Photograph: Gareth Chaney/Collins

The Blanchardstown-Mulhuddart region of west Dublin has the highest rate of Covid-19 in the State, according to the first national breakdown of incidence of the disease by local area.

Large parts of south Dublin, which went into near-lockdown overnight along with the rest of the county, have lower incidence than many areas not affected by the new restrictions, the analysis shows.

For the first time, data on the real-time incidence of the disease by local electoral area has been published on the Government’s online Covid-19 data hub. The information is designed to inform people about the spread of the disease in their area, thereby enabling them to tailor their behaviour appropriately.

Blackrock, with 35 cases per 100,000 people in the past 14 days, has the lowest incidence in Dublin. This figure is lower than that recorded in 12 other counties across the State unaffected by Dublin-specific restrictions on indoor dining, “wet pubs” and movement.

Stillorgan, with an incidence of 39, and Dún Laoghaire and Killiney-Shankill, both at 55, have the next-lowest incidences in Dublin.

In contrast, Blanchardstown-Mulhuddart is the national hot spot for the disease, with an incidence of 189. The next-highest figures nationally are in Tallaght central at 175; Celbridge, Co Kildare, at 171; and Dublin South-West Inner City, at 162.

Big contrasts within the same city are not confined to Dublin; in Limerick, the north of the city has an incidence of 127 while in the west it is just 17.

Virus levels in Cork are comparatively low, with the highest incidence recorded in Fermoy, at 24; Cork City South-West at 21; and Skibbereen in the west of the county at 16.

Connemara South has the highest rate in Galway at 56; with Tuam on 36; and Galway City Central at 26.

The localised information about virus trends is being published on foot of a request by Minister for Health Stephen Donnelly. “The Minister asked for incidence rates to be published at a more local level. He wanted people to be able to access more detailed information about this virus and how it is affecting their communities,” a spokeswoman said.

Specific local election areas in Louth, Leitrim and Waterford also feature as hot-spots for the disease on the map published on the Government’s website.

The new data is the result of a collaboration between the Department of Health, the Health Protection Surveillance Centre, the Health Service Executive, Health Intelligence Unit, Central Statistics Office, Ordnance Survey Ireland and Maynooth University.