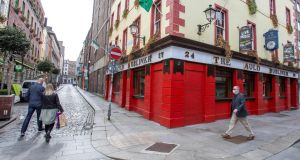 Closed-down pubs in Temple Bar, Dublin on Friday. There are likely to be calls for restrictions to be tailored more closely to specific problem areas, rather than across entire counties. Photograph: Paul Faith/AFP via Getty Images

Complaints about a lack of information have been a consistent feature of the pandemic experience in Ireland.

Whereas other countries publish detailed information about virus trends in local areas, this kind of data has been in short supply in this country.

The HSE did publish daily maps showing the location of cases back in April, but quickly stopped doing so, presumably for data protection reasons.

And while the Government’s Covid-19 data hub has a map showing the number of cases relative to population in electoral divisions across the State, this information was not updated after the site launched in June. The Department of Health said the number of cases at the time was too low to continue providing the data, as it could be used to identify an individual.

As a result, only cumulative data was available for the period from the start of the pandemic, as infectious diseases consultant Prof Sam McConkey and others have pointed out. The figures therefore tell us little about the current spread of the virus.

Finally, on the initiative of Minister for Health Stephen Donnelly, 14-day incidence figures are being published for each of the 166 local electoral areas (LEAs) in the country. These are larger geographical units than electoral divisions but they are small enough to give people in specific areas a clearer idea of virus spread in their locality.

There are 166 LEAs in the State, with an average population of almost 29,000. Each county and city is divided into a number of LEAs.

The first set of data shows how the virus is, by and large, spreading most in areas of deprivation. These are also areas with high proportions of immigrants and “new Irish”, indicating perhaps that the public health messaging is not reaching these sections of the population.

Some hotspots are clearly linked to specific outbreaks, such as in meat plants. Experience tells us these can be controlled but it is the spread of the disease in urban areas that is most worrying in the longer term.

Finally, the figures are likely to lead to calls for restrictions to be tailored more closely to specific problem areas, rather than across entire counties. Residents of parts of south Dublin may be feeling aggrieved today, now that new restrictions have been imposed on them, when the figures show the incidence of the disease is below the national average.