Voting controversy could result in 30-day suspensions for TDs 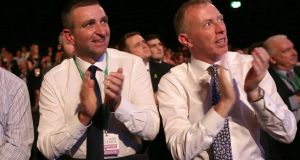 Fianna Fáil TDs Niall Collins and Timmy Dooley are being investigated over a series of votes last week. Photograph: PA

Fianna Fáil TDs Niall Collins and Timmy Dooley could each face a 30-day suspension from the Dáil if they are found to have breached voting rules by the internal ethics committee.

The committee is expected to examine allegations that four senior Fianna Fail TDs were in breach of ethics legislation following a complaint from Fine Gael TD Noel Rock.

The controversy first emerged when Fianna Fáil TD Niall Collins voted six times for colleague Timmy Dooley while he was absent from the chamber during Dáil votes last Thursday.

It then emerged that the party’s Brexit spokeswoman, Lisa Chambers, mistakenly sat in deputy leader Dara Calleary’s seat for one vote before moving to her own seat for the same vote.

Mr Rock has filed a complaint to the head of the Committee on Members’ Interests, Hildegarde Naughton, about the three TDs, along with Fianna Fáil TD for Offaly Barry Cowen.

If the complaints are accepted and not deemed vexatious, a statutory inquiry will ensue. The committee can recommend a motion of censure to the Dáil, which could result in a maximum 30-day suspension.

The ethics probe is separate to a short investigation being conducted by Clerk of the Dáil Peter Finnegan into last Thursday’s events on the orders of Ceann Comhairle Seán Ó Fearghaíl.

Mr Finnegan will interview the TDs concerned, tellers (TDs appointed to count the votes) and the party whips and report back to the committee on Thursday morning, though the scope could widen after the first report is published.

Meanwhile, Fianna Fáil reported eight cases where Fine Gael Ministers were away from their seats during votes to the Dáil’s procedural committee, saying that a review of videos had highlighted “serious issues”.

In reply Fine Gael conducted its own trawl of video, arguing that glimpses of the clothes, shoes and hands of Ministers are visible in the footage and prove that their people were in the chamber.

Mr Ó Fearghaíl briefed the Dáil Committee on Procedure on Tuesday evening on the progress of the inquiry into the circumstances surrounding last Thursday’s events.

A review of Dáil footage from the last 12 months found “serious issues with the voting system with systematic voting in place of other members”, according to an email from the Fianna Fáil whip’s office.

The brief review, it said, focused on TDs who should be visible in their seats: “It highlights eight clear instances where Ministers may have been absent from the chamber or have got somebody else to vote for them.”

Fianna Fáil leader Micheál Martin told a private meeting of his frontbenchers on Tuesday that he was “disappointed” by the revelations: “He basically said it was sloppy and we need to sharpen up,” said one.

Another TD present said Mr Martin had been very critical about the conduct of individuals: “It was a short contribution, but he was very strong. He was conveying that this was most certainly a setback.

“There is a feeling in the party that we had finally moved away from legacy issues and we had taken a lot of criticism on the chin, and then this happens. A lot of work has been put in. Everyone is frustrated,” said another source.