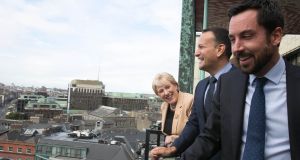 Minister for Business Heather Humphreys, Taoiseach Leo Varadkar and Minister for Housing Eoghan Murphy during the a launch of the establishment of the Land Development Agencyy. Photograph: Gareth Chaney/Collins

The Government’s flagship €1.25 billion Land Development Agency is “squarely within the definitions of state aid”, the legal adviser to the Dáil has said, raising possibilities of delays and curtailment of its powers.

In confidential legal advice to the Housing Committee seen by The Irish Times, the parliamentary legal adviser said the granting of land by the State to the agency and the use of National Treasury Management Agency funds “appear to fall squarely within the definitions of state aid”.

“Once the issue of state aid arises as a possibility, it is important for the State to engage with the [European] Commission. Unfortunately, no evidence of this engagement is apparent from public documentation.”

The legal advice warns that the establishment of the agency could interfere with the market, which would almost certainly attract attention from Brussels. It warns that it “appears clear” that the State is putting in place measures for the agency that “will put it in a more advantageous position than other developers in that industry”.

Sources said this raises the possibility of delays to the project and the curtailment of the agency’s powers. Although the commission can allow state aid in some circumstances, when it is determined to be compatible with the internal market, the powers of a body are often curtailed.

The legal advice points out that this was the case when Nama was established, with significantly limited powers of compulsory purchase. This could limit the agency’s capacity to assemble land banks to deliver its initial target of 10,000 homes. It has long-term aims to support the construction of 150,000 houses.

A spokesman for the department said the legislation for the agency had taken account of state aid rules. The department “will engage with the European Commission on state aid, where required, in the normal manner”.

“The [agency] is currently progressing work on its initial projects and delays in relation to state aid are not envisaged,” the spokesman said.

Earlier this summer, it was reported that the Attorney General had concerns over the state aid aspects of the scheme.

Separately, the chief executive of the Housing Agency has said the Government should not have renewed the Help to Buy scheme in the budget.

John O’Connor said renewing the scheme, which allows first-time buyers to claim back up to €20,000 of the price of a new home, risked repeating the mistakes of the Celtic Tiger era.

“In my view it’s important when you set a time-bound policy, you stick to it. We should have stuck to the time frame we had said,” Mr O’Connor said on the fringes of the biannual conference of the Irish Council of Social Housing in Co Wexford on Thursday.

“Part of the reason for the crash was some of the incentives that continued on and on,” he said.

The retention had been a key budget request from the Construction Industry Federation (CIF). Mr O’Connor said the retention of the tax break scheme had followed “very intense lobbying”.

The conference heard from a variety of domestic and international experts working in the social housing sector about challenges that are common across many developed societies.

Chrystal Kornegay, executive director of Boston-based housing agency MassHousing, explained how it had devised financial products to help lower income people assemble a deposit for a home. MassHousing, which is an independent agency established by the state legislature in Massachusetts, has also spent $73 million on rental housing for workers who are priced out of market rent, but earn too much to qualify for rent subsidies.

The conference also heard from Sébastien Garnier, an innovation manager with Housing Europe, an umbrella agency of housing organisations.

He said housing organisations across Europe were struggling with similar challenges, including “a patchwork of very costly solutions” to the problem of stratified housing access and segregation.

“There is sometimes a lack of political will to come up with solutions at a local level,” he said.