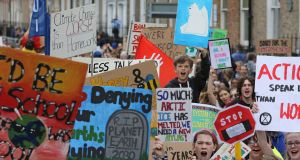 Demonstrators at a major climate protest in Dublin in May. File photograph: Nick Bradshaw

A majority of voters believe climate change is the most serious issue facing the world – but they are not convinced about carbon tax increases, and a substantial minority are sceptical about the urgency of the problem. The findings are from the latest Irish Times/Ipsos MRBI opinion poll, taken among 1,200 voters from Friday to Sunday.

More than half of all voters (55 per cent) said they agree that climate change “is the most serious issue facing the world”, with 36 per cent disagreeing with the statement.

Asked about the statement “I don’t think climate change will be as bad as people say so I’m not that worried about it” 57 per cent disagreed, while 33 per cent agreed. Voters were offered a series of statements and asked whether they agreed or disagreed.

On “I am okay with reducing my standard of living in order to help tackle climate change”, 54 per cent agreed and 36 per cent disagreed. However, when asked about specific measures – such as increases in fossil fuel prices – almost half said they disagreed with the idea. Those most convinced of the urgency of climate change tend to be younger, urban and better-off voters. Those less likely to be worried about it – and so less convinced of the need for action – tended to be older, rural, less well-off voters. Farmers were most sceptical about action on climate. Among the parties, Sinn Féin voters were the least supportive.