On the canvass: byelection in Dublin Fingal 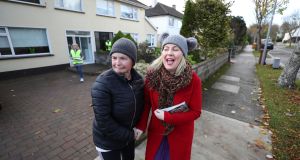 From the moment Clare Daly was elected to the European Parliament in May, Fianna Fáil’s Senator Lorraine Clifford-Lee was installed as front-runner in this race.

Yet even without her moment of Twitter notoriety last week, the general problem for Fianna Fáil is transfers. Of the 18 byelections held over the past 21 years, Fianna Fáil has won only one – Bobby Aylward in Carlow-Kilkenny in 2015.

Fingal is a Dublin constituency, but it is as rural as it is urban. As you drive from Portmarnock to Swords up through the Naul and into Balbriggan you see the contrasts – the jets descending into its biggest employer Dublin Airport; the pretty seaside commuter towns; the fertile lands dotted with greenhouses; the immigrant communities.

It’s the youngest constituency in the country, and the fastest growing. There are huge pressures for services, and a sense of straining at the seams.

Clifford-Lee has built up a high profile on the liberal wing of Fianna Fáil. Some of that has been undone by the emergence of her tweets from 2011 with derogatory references to Travellers. She has spent much of the time since then apologising.

On the doorsteps of Woodlands in Portmarnock, a pleasant estate built in the 1990s, she gets a broadly warm welcome. A few identify her for the comments, including one who says she is “the girl who was giving out about” Travellers. She apologises again.

Yet the couple at the door do not seem to be too worried, merely amused. It’s the non-core vote people who might have transferred that she will need to convince. “You can never predict [transfers],” she says.

What about former minister for health James Reilly? He has been out canvassing with Leo Varadkar, but it is the Taoiseach who is getting all the attention and the selfies. “I’m getting a good reception,” says Reilly.

He has made a new 40-bed day hospital in Swords, with eight operating theatres, a central plank of his campaign. “It’s really grabbing attention,” he says.

Government TDs do not tend to fare well in byelections, and there is no reason this will be an exception. So what candidates are in the strongest position?

At this juncture the two who look like they might go the distance are Joe O’Brien of the Green Party and Duncan Smith of Labour. This constituency was one of the few which returned a Labour TD in 2016, and, as Smith points out, it came second only to Fianna Fáil in the local elections.

He is full of energy as he canvasses Castle Grange mid-afternoon. It is a working class estate in Swords that was hostile to Labour in 2016, but seems to have come back. “We have a chance of winning,” says Smith. “There’s a good few people in the hunt. If we win it will be a big shock for others but not for us.”

O’Brien topped the poll in Skerries. He and a small team is canvassing around Ormonde in Swords. A low-key Cork native, he has long ago absorbed doorstep discussions.

“The locals in May were fantastic for us,” he says. “[Now] all across Fingal we are getting good reactions. People have a TD from all the other parties, but they don’t have a Green TD.”

The Clare Daly-backed candidate is Dean Mulligan, a councillor from River Valley and a social worker. He is still in his 20s, clearly committed with a friendly demeanour.

Others would say his profile is not sufficiently high. He disagrees. “As a younger person, one quarter of the population is under 24. There is a huge disconnect between politicians in power and young people out there.”

Well-regarded councillor Ann Graves is the standard bearer for Sinn Féin, but the party’s falling support levels in June will mean its bigger battle here will be trying to retain Louise O’Reilly’s seat.

Tracey Carey is standing for Social Democrats, and there are a number of other Independent candidates: Gemma O’Doherty, Cormac McKay, Glenn Brady, Charlie Keddy and Peadar O’Kelly.