FG leader says his party is ready to go into opposition, doesn’t rule out FF alliance 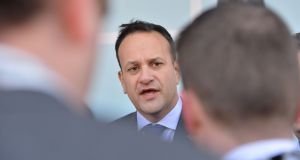 Taoiseach Leo Varadkar has said Sinn Féin and Fianna Fáil should try to form a government with each other and that Fine Gael is prepared to go into opposition.

Speaking after a six-hour meeting of the Fine Gael parliamentary party, Mr Varadkar did not rule out Fine Gael entering government with Fianna Fáil, but added: “I don’t foresee that happening.”

“The future is about leading the party into opposition,” Mr Varadkar said after the meeting in Leinster House.

Mr Varadkar has no mandate from his parliamentary party to enter government negotiations, but said he can meet with other parties to share views and analysis on the election, beginning with the Social Democrats on Tuesday.

According to those present at the meeting, the overwhelming view was that Fine Gael should go into opposition, while keeping participation in government – aside from an arrangement with Sinn Féin – open as a last resort.

Those who spoke against the idea of a coalition with Fianna Fáil included Minister for Rural Affairs Michael Ring and Dublin South West TD Colm Brophy, while Minister for Communications Richard Bruton is said to have suggested the possibility of the main parties entering a Danish-style minority government arrangement.

Tánaiste Simon Coveney and Minister for Justice Charlie Flanagan kept open the prospect of government with Fianna Fáil, if it was needed in the national interest.

Minister for Agriculture Michael Creed questioned if Mr Varadkar should put his name forward in the vote for Taoiseach when the 33rd Dáil meets on Thursday. Mr Varadkar said he will do so.

It is understood that Green Party leader Eamon Ryan will also put his name before the Dáil. A number of left-wing TDs said they are considering supporting the candidacy of Sinn Féin leader Mary Lou McDonald.

On Monday, Ms McDonald said it was still possible for her party to lead a minority government of the left without the involvement of Fine Gael or Fianna Fáil.

Her comments reflect a change of emphasis following remarks by her colleague Eoin Ó Broin on Friday that it would be impossible.

“All options are still on the table but we’re all able to count,” Ms McDonald said, “we’re able to add, and we’re able to subtract so I think we have recognised that the mathematics are tricky.”

Other Fine Gael TDs who raised concerns at Monday night’s meeting about coalition with Fianna Fáil were John Paul Phelan and Peter Burke. Both are understood to have questioned why Fine Gael would say it is both preparing for opposition while leaving open the option of entering government.

Minister for Health Simon Harris also said government participation should be kept on the table, although some present noted that Minister for Finance Paschal Donohoe did not express a view.