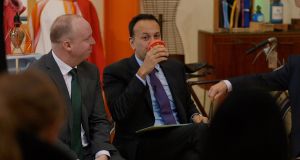 If in Government, Leo Varadkar confirmed carbon taxes would increase by €6 per tonne annually up to 2030. Photograph: Enda O’Dowd

Taoiseach Leo Varadkar has put it up to the Green Party to show how its proposals for a radical reduction in carbon emissions can be achieved over the next decade and to outline the implications for the economy including the cost of living.

The Greens have called for a 7 per cent a year reduction in carbon emissions, rather than the 2 per cent figure currently in place in line with the Government’s climate action plan targets.

His call came at the Fine Gael launch of its climate action policy for Election 2020 on Saturday when the party announced plans for 70 per cent renewable electricity by 2030; the retrofitting of 500,000 homes and €8.6 billion investment in public transport.

It strongly defended plans – dismissed as unrealistic – to have 1 million electric vehicles on Irish roads by the end of decade, adding “the resistance of motor industry will have to change”.

If in government, Mr Varadkar said Fine Gael would “ring fence 10 per cent of all carbon tax revenue to deliver for cycling and active travel (i.e. walking)”; an investment of €600 million. A five-year plan to at least double the number cycling on a daily basis to work would be published shortly after coming into office – the Green Party has been calling for similar measures in recent years.

Mr Varadkar confirmed carbon taxes would increase by €6 per tonne annually up to 2030, while he said the recent Budget increase meant Fine Gael were prepared to take radical action and had “bit the bullet on carbon tax”.

A portion of the carbon tax revenue would be used for enhanced rural transport, while he believed the more people see re-investment in climate action for their communities, the more “it helps to bring the country along”.

The move to “70 per cent clean power” would transform the electricity system including building an offshore wind sector to power hundreds of thousands of homes and a €1 billion new underwater sea cable linking Ireland’s electricity grid to France.

Asked about the Greens’ proposal for a legally-binding 7 per cent annual cut in emissions and if it suggested they were far more ambitious on climate, he said: “It’s really up to the Green Party to show how that can be achieved.”

It was a “pretty extreme shift. The public would want to know how it will be done, how will that impact on cost of living... and on their ability to go to and from work. I don’t think that has been explained yet by the Green Party,” he added.

The Government was always open to increasing the plan’s ambitions plan on a continuous basis or in talks with other parties after the election.

Speaking at the Rediscovery Centre in Ballymun, Minister for Climate Action and Environment Richard Bruton insisted the Government’s climate strategy was “shifting the dial dramatically”.

The move to retrofit 500,000 houses would require a new funding model. This was being piloted in the Midlands, where “just transition” supports were most needed as peat extraction ends. This would start with social housing with increased supports for low-income families. He confirmed €116 million is to be spent in the region including bog restoration, reskilling and supporting communities and businesses.

“We will group homes together to drive down costs, develop lower cost green loans and easy pay back models. We will phase out the installation of oil and gas boilers in all new homes,” he added.

He dismissed claims electric vehicle targets would run into conflict with EU competition law. Scandinavian countries were applying the same principles as Ireland, and he had no doubt the EU would accelerate the move to EVs in line with its increased ambition in cutting emissions by 50 to 55 per cent by 2030.

The chairwoman of the Oireachtas Climate Action Committee Hildegarde Naughton said its climate report last year got it right in setting out how Ireland could decarbonise, “and that wasn’t just political expedient”.

Responding to Mr Varadkar’s comments, Green Party leader Eamon Ryan pointed out Mr Bruton during the last day of the Dáil had agreed 2 per cent was not an adequate target. “It suggests he is going against his own party members,” he added.

Everybody familiar with the issue knew it was insufficient; “7 per cent is the bare minimum, according to the science”. A draft report from the climate committee in relation to the Government’s National Climate and Energy Plan and long-term strategy suggested it be at least 7 per cent, to be aligned with the EU’s 2030 target.

Such a target would be “a big leap” and would be challenging but it would help create a better economy. Denmark had set a 70 per cent reduction target for 2030 which was an attempt to get ahead of the curve, regarding it as a benefit rather than a burden, Mr Ryan said.