UUP chief to vote for SDLP ahead of rival unionists 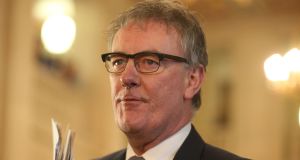 UUP leader Mike Nesbitt has said: “I am saying you should vote for any candidate that you trust will do the right thing for your community and for your constituency and for Northern Ireland.” File photograph: Niall Carson/PA Wire

The leader of the Ulster Unionists has said that, after his own party, he will vote for the nationalist SDLP ahead of other unionist candidates in the coming Northern Assembly election.

Mike Nesbitt said when ranking candidates in preference, using the election’s single transferable vote system, he would select the SDLP after supporting the UUP’s own Stormont hopefuls on the ballot paper.

However, Mr Nesbitt did not go as far to say he would advise other UUP supporters to adopt the same approach.

The UUP and SDLP have positioned themselves as an alternative partnership government at Stormont to take the place of the long-standing DUP-Sinn Féin-led coalition.

Mr Nesbitt said he personally would be “standing square” behind his vision of a UUP-SDLP-led administration.

“I will be transferring from my Ulster Unionist votes to the SDLP,” he said.

In regard to his transfer advice for the UUP faithful, he told the BBC’s Sunday Politics show: “I am saying you should vote for any candidate that you trust will do the right thing for your community and for your constituency and for Northern Ireland. ”

He said: “We are fighting very hard to retain seats and gain seats and our job as a political party is to get people to vote for us, it’s the same for Mike Nesbitt.”

“After that we are asking people to vote for change - and it’s up to others, individuals, to decide how they vote.

“We are not going to try and convince people to vote beyond us. We think it is important that people come out and vote for the SDLP.”

“There will be many Ulster Unionist Party members who will be dismayed that Mike Nesbitt wishes to reverse that trend through his desire to see nationalist representation in the Assembly increased ahead of other unionists,” he added.

TUV leader Jim Allister said: “Giving preferences to nationalists before unionists should not be the business of the leader of a party committed to maintaining the Union.”