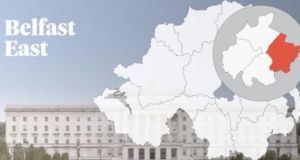 Last May, when this was a six-seater constituency rather than the five-seater it is now, the DUP won three seats, Alliance two and the Ulster Unionist Party one

Belfast East is another constituency where the “cash for ash” crisis could have a vital bearing on the Northern Ireland Assembly election result.

Just as the House of Commons speaker, John Bercow, has been making headlines for judging US president Donald Trump unfit to address the British parliament so has outgoing Assembly speaker Robin Newton been in the news over how he handled Assembly chamber business on the controversial Renewable Heat Incentive (RHI) scheme.

Last May, when this was a six-seater constituency rather than the five-seater it is now, the Democratic Unionist Party (DUP) won three seats, Alliance two and the Ulster Unionist Party one.

Somebody has to lose out and here the battle is likely to be between the DUP and Alliance, with Ulster Unionist outgoing MLA Andy Allen in a reasonably good position to be returned – although he may have some anxieties.

In fact, the contest for the fifth and final seat could be a mirror of last May’s election. Last year, veteran DUP politician Newton (71) and the 36-year-old Chris Lyttle for Alliance were elected on the final and 13th count.

Newton, with 3,875 votes, was more than a thousand first preferences ahead of Lyttle who polled 2, 805 votes. Transfers were critical in ensuring both Newton and Lyttle were elected and will be again in dictating how this election will unfold.

DUP outgoing MLA Joanne Bunting topped the poll with 5,538 votes and is expected to be elected again. She was narrowly ahead of Alliance leader Naomi Long, who also seems sure to be returned.

Thereafter, it gets unpredictable.

Sammy Douglas came in third last May for the DUP with 4,230 votes, but is not running this time, handing over the mantle to his son David.

The question is, will the Douglas name carry the same clout or could David Douglas’s inexperience count against him?

Calls to stand down

Perhaps the bigger question is what bearing the RHI debacle will have on the election? In late December, Mr Newton faced calls to stand down as speaker from Sinn Féin, the UUP and the SDLP over how he dealt with a debate on the scheme which could result in an overspend of £490 million (€575 million) up to 2036.

He was accused of breaching parliamentary rules after allowing his leader and former first minister Arlene Foster to make a statement in the Assembly chamber, even though she did not have the approval of former deputy first minister Martin McGuinness.

Mr Newton denied allegations of bias and insisted he was following Stormont procedures in allowing Ms Foster to speak. Whether or not he was correct is a moot point – what matters now is how the public interpreted the row, and whether that will translate to the ballot box.

Andy Allen, who is the UUP’s communities’ spokesman, was co-opted during the 2011-2015 Assembly to replace Michael Copeland who stood down for health reasons. Visually impaired and a wheelchair user, he lost both his legs in a Taliban bomb explosion while serving with the Royal Irish Regiment in Afghanistan in 2008.

He speaks regularly in the Assembly and has developed a public profile since he was elected.

Dr John Kyle is running for the Progressive Unionist Party (PUP) which had a stronger presence in the constituency when the late David Ervine and Dawn Purvis led the party. Georgina Milne is running for the Greens which won a respectable 2,183 votes last May.

Their transfers, and also those of the Sinn Féin, TUV and SDLP candidates, could be crucial in the final result.

The DUP is the dominant force in Belfast East, but its sway may have diminished. Former DUP leader and first minister Peter Robinson sensationally lost his House of Commons seat in 2010 to Alliance’s Naomi Long although Gavin Robinson (no relation) regained it in 2015.

Alliance has established a strong foothold in the constituency and is in a good position to hold its two seats.

The “cash for ash” fiasco could be the deciding factor here and that could leave the DUP most vulnerable.