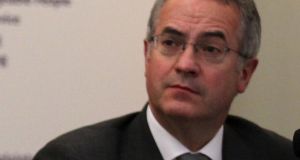 It is a tough brief being a politician. You fight and fret for a seat and then when you reach Stormont you think you have another five years of security before facing the electorate again.

And then the unexpected happens, the renewable heat incentive crisis bursts into flame and eight months after the last poll you are back out on the streets, knocking on doors and annoying the voters once more.

Such must be the feeling of the outgoing candidates competing in Belfast West. But the one who feels it most surely must be SDLP veteran Alex Attwood. A qualified solicitor but full time politician he was first elected to the constituency for the Assembly in 1998 and has held the seat since then.

In 1992, when the IRA was waging its campaign of violence, west Belfast voters sent a message to Sinn Féin about the “war” by ousting its MP Gerry Adams and putting in the SDLP’s Dr Joe Hendron instead.

But there is a real danger that for the first time Belfast West will desert the SDLP entirely. Last May, Mr Attwood won the sixth seat with just 7.3 per cent of first-preference votes. This time, the quota is 16.7 per cent and it will be a major test for Mr Attwood to be returned, particularly when as with the other 17 constituencies this is now a five-seat constituency.

Losing Mr Attwood would be a major blow for the party because he is one of its senior back-room tacticians who helps shape planning and policy.

While this is solid Sinn Féin territory the party nonetheless lost a seat last year to People Before Profit’s Gerry Carroll, who is running again but this time with a running mate, Michael Collins.

Mr Carroll topped the poll with 8,299 votes – 22.9 per cent of first preferences - and should be a shoo-in. Whether he can bring in another candidate with him, however, is problematical.

Sinn Féin, even though it lost a seat last time, has a superb electoral machine in west Belfast. It is running four candidates, all outgoing MLAs. Three are longstanding republicans – Alex Maskey, Fra McCann and Pat Sheehan. Its fourth candidate is 28-year-old Órlaithí Flynn, who was co-opted onto the Assembly in December, replacing former junior minister Jennifer McCann, who has bowed out of front-line politics.

Party vote management is strong with supporters advised in different areas of Belfast West which candidate to vote for and how transfers should be distributed.

Frank McCoubrey is standing for the DUP. Last year he won a respectable 3,766 votes, or 10.4 per cent of first preferences. Veteran Ulster Unionist Fred Rodgers also is running.

If the unionist vote on the loyalist Shankill came out as strongly as it does on the nationalist Falls then Mr McCoubrey might be in with a shout. That happened in 2003 when current DUP MEP Diane Dodds won a seat in west Belfast and held it for one term. The trouble for unionist politicians is that the vote tends to stay at home or not vote tactically.

Gerry Carroll should be returned for People Before Profit but it may be too ambitious for him to take in a running mate. Sinn Féin seems assured of at least three seats with the final seat probably between Mr Attwood and one of Sinn Féin’s four candidates. It seems astonishing that Belfast West, after all these years, would abandon the SDLP but that may happen this time.